Green leader says party ‘must be prepared to enter government’ 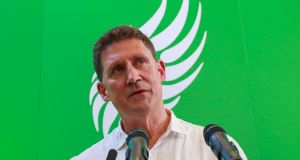 Green leader Eamon Ryan has set his party on a firm path to be part of a coalition after the next election by saying it “must be open and prepared to enter government”.

In his keynote speech to the party’s national convention in Dublin at the weekend, Mr Ryan argued that entering government was the most effective way to address the climate emergency.

Speaking to The Irish Times, he also ruled out any electoral pact or alliance with parties of the left and centre-left in the run-up to the next general election.

His stance received a strong endorsement from the 400 delegates who voted five-to-one against a motion to reject coalition with either Fine Gael or Fianna Fáíl.

Another motion to identify the Greens as an “explicitly anti-capitalist” party was amended to the less forthright “anti-neoliberalism”.

Speaking to delegates, Mr Ryan harked back to the Green’s first difficult experience in coalition, beginning in 2007, which resulted in the party losing all its seats in 2011.

“I know from experience how hard that can be but also what can be achieved. To prepare properly it is important to set out the principles that we would approach any programme for government negotiations.”

He said the party should be willing to talk to any party which shared its core belief in constitutional, democratic and peaceful politics.

The key motion on rejecting the two big parties as coalition partners was tabled by Cork councillor Lorna Bogue, who said neither Fine Gael nor Fianna Fáil were willing to take the immediate action that was necessary.

“Right wing parties are in the past,” she said.

The party’s European candidate in Midlands-North-West Sorcha McHugh siad there was a huge space for a progressive left-wing party. “We need to calm ourselves and build to fill that void” and become a dominant and powerful force, she said.

She added that the two big parties would “have to come to us” if they wanted a deal rather than the Greens approaching them.

“There is no point in us rushing [into government] for a few ministerial roles,” she said.

However, senior figures in the party, including Roderic O’Gorman and Sadhbh O’Neill, argued strongly against the motion.

In an impassioned speech, Mr O’Gorman said he well remembered the pain and shock of 2011 and 2009. “I know what it was like. I have no illusion that future coalition will be easy. I did not join this party to be safe.”

In the event, the motion, which required a two-thirds majority to pass, was heavily defeated by delegates.

In his speech, Mr Ryan also lambasted the Government’s transport policies for favouring cars and road development and called Fine Gael and Minister for Transport Shane Ross “a waste of space”.

“Their only road map is to build yet more roads. Their only climate initiative is to switch from fossil-fuelled cars to ones powered by a battery. They are blind to the unsustainable sprawl, long-distance commutes and gridlock,” he said.