Traffic volumes up as latest Covid-19 restrictions are lifted 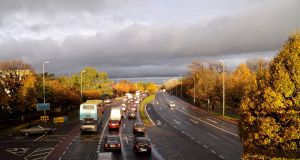 File photo: Traffic volumes are nowhere near what they normally would be suggesting that a lot of people have not returned to their offices and are obeying the rule that they must stay within 20km of home. Photograph: iStock

Traffic volumes on Irish roads are up substantially on Monday as a result of the latest lifting of restrictions, according to new figures released by Transport Infrastructure Ireland (TII).

Figures for the morning rush hour reveal traffic is up by between 5 and 24 per cent on the busiest routes in the country in comparison with the previous Monday.

However, as last Monday was a bank holiday, the benchmark figure is an estimate of what traffic would have been like last Monday had it been a normal working day during the Covid-19 period.

The M11 between Bray North and Bray Central was up by 13 per cent between 7am and 10am this Monday.

Outside Dublin, traffic volumes on the M7 between junctions 29 and 30 (Ballysimon to Rosbrien) into Limerick City were up by 9 per cent.

The N40 from the Kinsale Road to Douglas in Cork was up by 8 per cent, the M9 into Waterford city between junctions 11 and 12 up by 5 per cent and the N6 at Bóthar na dTreabh in Galway was also up by 5 per cent.

The largest increase was on the M1 north of junction 20 between Jonesboro and the border. Traffic volumes were up by 24 per cent on that stretch of road.

However, traffic volumes are nowhere near what they normally would be suggesting that a lot of people have not returned to their offices and are obeying the rule that they must stay within 20km of home.

Transport Infrastructure Ireland concluded: “As a general conclusion, this morning’s increase in car traffic across the sample traffic counters appears to be higher than the growth levels experienced last week.”