Taoiseach Leo Varadkar has announced that the roadmap to reopening the country will be accelerated and shortened as he said a “new day” is approaching. Video: RTÉ 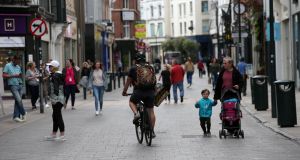 Taoiseach Leo Varadkar has said Ireland has “earned the right to be hopeful about the future again” as the Government dramatically accelerated the roadmap to lift coronavirus restrictions.

The plan to reopen the country after months of lockdown will largely end on July 20th, and only comprise four phases rather than five.

People will be able to travel within their own counties from Monday and the domestic tourism industry will reopen from June 29th in an effort to salvage some of the summer season.

However, in recommending that Ireland progress to the second phase from Monday and accelerate the lifting of restrictions, the National Public Health Emergency Team (NPHET) warned that “stricter measures” may need to be reintroduced if there was an upsurge in cases of Covid-19.

In a letter sent on Thursday to Minister for Health Simon Harris, Dr Tony Holohan, the chief medical officer, said it was “impossible to predict with certainty what the future trajectory of the Covid-19 disease will be in Ireland”.

The emergency team said the “easing of measures always has the potential to increase the risk of transmission of infection” and concerns were raised that workplaces had the potential to become “foci” for new clusters as public health measures were eased.

The acceleration in reopening came after two Cabinet meetings on Thursday night and Friday morning, with Ministers choosing to deviate from the advice of the team on two issues: the decision to allow people travel within their counties from Monday; and to allow shopping centres reopen, albeit with restrictions, on June 15th.

Some Ministers said the Cabinet had taken the initiative, while Mr Varadkar and Mr Harris said the team and the Government had worked together.

Mr Varadkar said the third phase and the fourth, final phase – which will take effect from June 29th and July 20th respectively – would be redefined in the coming weeks, in a process led by NPHET.

The Taoiseach has said he wants to lift the 14-day quarantine requirement for people arriving into Ireland from other countries which have been successful in tackling the virus – effectively allowing Irish people go on foreign holidays to certain destinations – but it is not yet clear from when this might apply.

Announcing the changes, Mr Varadkar said: “During this emergency we have suffered as a country, lost loved ones and changed the way that we work and live. We are making progress. We are heading in the right direction. And we have earned the right to be hopeful about the future again.”

Dr Holohan said the emergency team would “develop some guidance” around the two-metre social distancing rules for the hospitality sector during periods of low transmission.

Fianna Fáil leader Micheál Martin welcomed the changes, particularly the easing of restrictions on travel, while Sinn Féin leader Mary Lou McDonald said the acceleration was “great news all round”.

Mr Harris said everyone had a role to play in ensuring the country could “safely find a way to live alongside” coronavirus. Health Service Executive chief executive Paul Reid said now was the time for “strengthened personal vigilance”, such as doing the “small hygiene things very well”.

Minister for Finance Paschal Donohoe and Minister for Social Protection Regina Doherty also announced on Friday that the wage subsidy scheme, which is subsidising almost 500,000 workers, and the pandemic unemployment payment, which Ms Doherty said provided help to 600,000 people, would continue until the end of August.

But other challenges face Ministers, such as the request from Minister for Transport Shane Ross for a €460 million bailout for bus and rail operators whose incomes have been reduced during the pandemic.