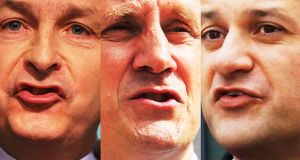 Party leaders have sought to keep the Government-formation process on track following a weekend of disagreements and a Green Party leadership challenge which destabilised the negotiations.

The leaders of Fine Gael, Fianna Fáil and the Green Party met for four hours yesterday in an attempt to resolve major outstanding issues which included disagreements around how and when to reduce the country’s deficit and an impasse over the planned increase in the pension age.

Sources last night said that there was “movement” on the pension issue with Fianna Fáil figures saying there was “optimism” around their demand to keep the pension age at 66.

It is understood that Fine Gael are also insisting on guarantees that income tax and USC will not go up and will also demand a “July jobs” initiative to stimulate job creation and help out sectors like tourism and retail. Well-placed sources said the talks were successful and leaders now believe they can see the “landing zone” on almost all of the major sticking points. In a statement after the meeting, the parties said they “had a constructive meeting and made progress with many outstanding issues. “All parties will continue the talks tomorrow.”

The three parties reached broad agreement over the weekend in areas such as communications, energy, social protection, health and retrofitting. They are also near agreement on the issues of transport and infrastructure, with sources in the Green Party admitting that roads projects which are already in process are likely to proceed, leaving less money for cycling and walking budgets.

Among the sticking points which arose was the issue of the abortion legislation which is due to come up for review in the lifetime of the next government.

It is understood that the Green Party pushed for the three-day waiting period to access medication to be removed and negotiators also sought the imposition of exclusion zones outside abortion care centres.

Sources say this was resisted by Fianna Fáil, who are understood to have raised concerns that they could encounter difficulties with their membership if this was included in the text of the programme for government. A source in Fianna Fáil said the party wanted to respect the result of the referendum in terms of the three-day wait and said individual members of the party have no objection to exclusion zones that would prohibit protests outside facilities.

Some of the policies agreed in principle over the weekend include: a commitment to protect the core welfare rates; a retrofitting scheme that homeowners could pay back through their utilities; a promise to establish a media commission which is “platform agnostic” to ensure the future viability of the industry.

A Fine Gael source said Taoiseach Leo Varadkar has made clear that while Ireland can borrow cheaply at the moment, this will not always be the case and the country needs to ensure that the deficit is reduced.

A Green Party source said the current demand from the other two parties is for a yearly reduction in the deficit which would begin immediately. “That to us is basically austerity,” a party figure said.

Green Party demands to reduce the level of greenhouse gas emissions by 7 per cent per annum were also described as a “particularly sticky” issue.

The negotiating process was also complicated by the decision of Catherine Martin to run for the Green Party leadership against Eamon Ryan.