Figures from ISME show that as many as 94,000 jobs could be lost 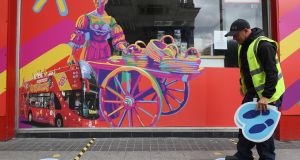 The Government has accelerated its plan to reopen the State’s economy, which will see many tourism businesses open from the end of June while retail outlets can open from Monday. Photograph: Brian Lawless/PA Wire

The Government should consider introducing a zero VAT rate for some businesses, according to KPMG, one of the State’s largest accountancy firms. The call comes as new figures show the reopening of the construction sector failed to spark a swift rebound in activity last month.

In a submission to the Department of Finance, KPMG examined measures which could be implemented to reboot the economy. Among its suggestions was a zero rate of VAT for businesses affected by the Covid-19 crisis such as restaurants, cafes, bars and retailers other than food retailers.

“Given that businesses will not be operating at full capacity when they do reopen, profit margins are likely to be lower and cashflows under pressure. Applying a zero rate of VAT to supplies of such businesses would assist them in overcoming these challenges in the short-term,” the firm said, adding that another benefit of the proposal is that it and support exchequer returns through businesses recovering more quickly. Another benefit of this proposal is that it “assists those businesses that are trading and do not require an upfront injection to be made by the State”.

The firm suggests that the zero rate could be applied initially for a period of six months. It also suggested that as the economy recovers, the Government should examine a reintroduction of the 9 per cent VAT rate for tourism and hospitality businesses. Other suggestions included a waiver of rates for this year and an expansion of liquidity supports for small and medium-sized businesses (SMEs).

“The revival measures suggested are intended to ease immediate cash-flow concerns faced by businesses that have suffered a significant decline in revenue,” the firm’s managing partner, Seamus Hand, said.

The submission comes as the Irish small business lobby group, Isme, warned almost 94,000 jobs in SMEs could be lost as a result of the crisis. The figures are based on a survey of business sentiment, which found that more than 6 per cent of respondents said their business couldn’t continue as a going concern beyond the next month. Based on the fact that Revenue estimates that more than 1.56 million people are employed in SMEs, that suggests possible job losses of almost 94,000.

The lobby group’s chief executive, Neil McDonnell, noted that “we’re looking at a long runway back to normality”, and added that all of those jobs won’t necessarily be lost indefinitely. He suggested that there will be some displacement from retail into logistics, for example.

Former Department of Finance secretary general John Moran, chairman of lobby group SME Recovery Ireland, said that “there is a real risk that if we don’t wake up and protect the SME sector now it will become the nursing home sector of the economy”. The group called for Government to provide easier access to less costly liquidity “to ensure our small businesses have the cashflow to survive”.

The Government has accelerated its plan to reopen the State’s economy, which will see many tourism businesses open from the end of June while retail outlets can open from Monday.

But data from Ulster Bank shows that even when sectors reopened there wasn’t a swift rebound. The bank’s construction purchasing managers index, which measures activity in the sector, stood at 19.9 in May, up from 4.5 in April. Any reading below 50 signals a contraction. So although the rate of contraction was weaker than the unprecedented decline seen in the previous month, the rate was still sharper than at any other time in 20 years of data collection.

“Other key indicators from the survey paint a similar picture, with the new orders and employment indices remaining firmly in contraction territory but respondents reporting a less negative picture compared to April’s record declines. Indications that at least the pace of deterioration eased last month following the easing of restrictions does lay the groundwork for clearer signs of outright recovery in the months ahead,” Ulster Bank said.