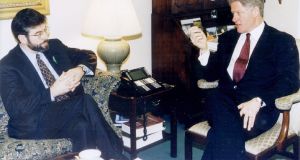 Former Sinn Féin president Gerry Adams has called upon Irish-American supporters to begin lobbying for a referendum on the unification of Ireland.

In an online conversation with former congressman Joe Crowley, hosted by the Friends of Sinn Féin, Mr Adams said that “now is the time for Irish America again,” and that drumming up support from the US in pushing for a unity vote “is a doable project.”

“There would not be a Good Friday Agreement without Irish America — that is absolutely clear,” he said.

“If [former US president] Bill Clinton had not been persuaded to intervene to overturn what was decades of US foreign policy of accepting the British position, then God knows where we’d be this day.”

In 1994, Mr Clinton overturned a ban that prevented Mr Adams from travelling to the US and granted him a three-day visa. Friends of Sinn Féin, the party’s American fundraising arm, was established a year later.

Irish America “has played a key role in all the big moments in the history of this small island of Ireland, and now it’s your day”, said Mr Adams.

“We now have, thanks to the Good Friday Agreement, a peaceful way to end the union with Britain. I’d like to say to people in Irish America: come forward, lobby, be active, campaign. Help the Friends of Sinn Féin, try and help us get that referendum so we can decide our own future.”

The Belfast Agreement, which was signed and ratified on Good Friday, 1998, allows for a referendum on the reunification of Ireland if the Northern Ireland Secretary believes enough votes would be cast for it to pass.

In February, the results of an exit poll held during the Irish general election showed that a majority of those surveyed wanted referendums on both sides of the Border to be held within the next five years. An outline to achieve a referendum was one of the key elements of Sinn Féin’s election manifesto.

Under the current US administration, focus on Ireland has centred on the outcome of the Brexit vote. A year ago, during a whirlwind visit, President Donald Trump told Taoiseach Leo Varadkar he believed Ireland would be in “great shape,” and that he didn’t think the border would be a problem.

Mr Crowley now wants to shift the conversation back to a unity vote. In the online conference on Thursday night, he admitted that he was “ceremoniously unelected” two years ago when he lost the Democratic primary in New York’s 14th congressional district to Alexandria Ocasio-Cortez, who went on to win a seat in the US House of Representatives.

Mr Crowley was also a “very active” member of the Friends of Ireland Caucus as well as co-chair on the Ad-Hoc Committee on Irish Affairs, and was one of the more prominent Democratic voices on Capitol Hill when it came to Irish-American issues.

But with 10 terms behind him, and what he sees as “a withering away” of some key voices in the halls of power, Mr Crowley said it is still “important for Irish-Americans to not only stay engaged, but re-engage” on the issue of unifying Ireland, adding that any lobbying from the US would benefit from bipartisan support.

“There hasn’t been as much introspection here in the United States. The Irish in America...think the battle is won,” he said. “We have the Good Friday Agreement and there’s peace on the island of Ireland.”

Richard Lawlor, the national vice chairman of NORAID, said after the broadcast he believed these factors contributed to a level of complacency among Irish-Americans, but that Brexit and the concern over how it will be carried out without a hard border “is an accelerant” to start lobbying again.

“There’s work to do, and we should get about doing it,” he said.