Serving ‘substantial’ meal will be required for pubs to reopen 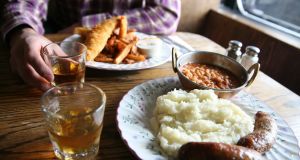 ‘Substantial meal’ is needed to be served for pubs to serve drinks. Photograph: iStock

Pubs serving food and opening on June 29th will have to give customers limited time slots in their premises and provide a “substantial” meal, under new guidelines being considered by Government officials.

Guidelines for reopening the hospitality industry following the Covid-19 lockdown are due to be published on Tuesday and sources involved in the drafting of the documents say pubs intending to open at the end of month may be asked to provide two courses and operate table service.

Hotels will also be advised to place key cards onto guests’ phones, ban buffets and provide breakfast in the room.

Sources have said there is concern in the hospitality industry at the impact this will have on five-star hotels in particular and that further advice may be needed in relation to spas.

While the draft guidelines still contain references to the two-metre social distancing rule, there is significant pressure and lobbying from business groups to reduce this to one metre.

Meanwhile, Dublin buses, trains and trams will be closely monitored on Monday to ensure continued physical distancing as the second reopening phase from the Covid-19 lockdown kicks in.

Government and transport sources said difficulties in maintaining the two-metre limit between passengers would increase pressure to introduce mandatory wearing of face coverings.

The trade-off is considered risky as two-metre distancing is considered more effective in protecting against the virus and the State’s chief medical officer Dr Tony Holohan has said face coverings “are not magic shields” to prevent the transmission of the disease.

The Department of Health reported on Sunday that one more person had died from Covid-19, bringing the death toll in the State to 1,679. There were a further 25 confirmed cases of the disease reported, bringing the total number of cases to 25,201.

Minister for Health Simon Harris yesterday encouraged people to wear a face covering on public transport and in enclosed spaces such as shops, but the coverings are not compulsory.

The World Health Organisation (WHO) issued new advice on face coverings over the weekend saying that they should be worn where it is not possible to maintain social distancing.

Dr David Nabarro, WHO special envoy on Covid-19, said that it was up to national governments to decide on a policy of making face coverings mandatory.

On this question, a spokeswoman for Mr Harris said that as society and the economy reopens, “individual hygiene measures will become more important than ever and face coverings is an additional hygiene measure that should be adopted in these certain circumstances”.

“Our position is constantly under review and all international evidence will be taken into consideration,” she said.

Bus and train inspectors are due to monitor passenger numbers and distancing behaviour on Dublin Bus services and on Dart and commuter trains as capacity will be limited to 25 per cent or less of normal to protect against the spread of the virus.

Normal weekday services are resuming after public transport use fell by 90 per cent during the lockdown. Inspectors will check for “any particular pinch points”, said one source, though the most pressure is not expected until the hospitality industry opens in the third phase on June 29th.

It has further emerged that the State’s health watchdog received 280 complaints about nursing homes - the sector worst affected by the virus - during the first two months of the pandemic.

In a complaint to the Health Information and Quality Authority, it was claimed that nursing home staff who tested positive for Covid-19 but had no symptoms were asked to continue working.

In a separate complaint, it was alleged that untested staff at another home continued working though they had symptoms of the virus.