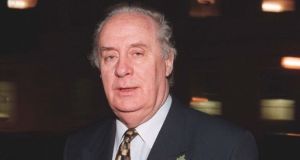 This year marks the centenary of the Armistice and also the 20th anniversary of the Island of Ireland Peace Park in Flanders.

From conception to opening, the park took just two years. It stands on the gentle slopes of Messines Ridge where Irish nationalists and unionists fought together in 1917.

It would not have happened without the single-mindedness of Donegal man Paddy Harte and his unionist friend from across the border in Derry Glenn Barr.

Harte was an unorthodox politician. He lost the Fine Gael whip over the issue of abortion in the 1990s; he wore a poppy when no other southern Irish politician would wear one.

He believed Irish neutrality was wrong in the second World War. He regarded James Dillon, the only Irish politician of his time to advocate against neutrality, as Fine Gael’s lost leader.

Barr was equally unorthodox. He was best known for his involvement in the Ulster Defence Association (UDA) and the workers’ strike which brought down the Sunningdale Agreement. He came to the realisation, as did Harte, that conflict was not the way forward.

The opening of the peace park took place place two years to the day after a visit to the Somme so profoundly affected the two men that they resolved once and for all to remember the Irish war dead.

“The list of Irish names was endless,” Harte wrote in his 2005 memoir Young Tigers and Mongrel Foxes of his visit to the Western Front in November 1996.

“As a Catholic I have been taught to pray for the dead and here were many thousands killed in a most cruel and savage way and for whom I had never been asked to say a prayer.

“They had been conveniently forgotten. The Catholics and Protestant Irish who died in two world wars as comrades fighting tyranny and a common enemy would not have envisaged returning to an Ireland in which they would hate and kill each other.”

Both men envisaged the park as a memorial to the first World War and to the Troubles. They founded the Journey of Reconciliation Trust with that view in mind.

The park was built near where the 16th (Irish) Division and 36th (Ulster) Division fought together at the Battle of Messines Ridge though the actual site where the tower is located was captured by the New Zealanders on June 7th, 1917.

The centrepiece is the ancient Irish symbol of a round tower, a proposal that was initially greeted with scepticism, but Harte persisted in his vision of building one that would be the same height as Glendalough.

He went to the then taoiseach John Bruton looking for funding. Bruton offered him a smaller sum of money and suggested he build a smaller tower.

Harte responded: “Yes John, We could build it six feet, fifty feet or even forty feet, but we are not. We are going to build it the same height as Glendalough – 100 feet high. This is to remember the dead of the first World War who our tradition has forgotten and if it is the last thing I do, it will be done right.”

At the 1997 general election, Harte lost his seat and with it a parliamentary career that stretched back to 1961. That election also brought a change of government. This double calamity might have been the end of the project.

Historically successive Fianna Fáil governments had not been sympathetic to the Irish who died in British uniforms, but the new taoiseach Bertie Ahern proved to be more than amenable to the project and it was finished on time and on budget.

The park was opened by president Mary McAleese on Armistice Day 1998. Queen Elizabeth II and the Belgian King Albert were also in attendance.

Harte recalled in his memoir: “It was a memorable day and a great historical occasion. It must rate as one of the most significant moments of true reconciliation between the peoples of Ireland and Great Britain in the last 80 years.

“Stories of people throughout Ireland, North and South, nationalist, unionist, loyalist and republican, who had watched the events with tears in their eyes were received by me and by my family for months afterwards. People were overjoyed that at last the State acknowledged the wrong and put it right.

“Many explained that they had a grandfather, an uncle or granduncle who fought and died. Some were getting to know for the first time about relatives who had died in the battle.”

The Island of Ireland Peace Park was followed in 2005 by the nearby Messines Peace Village. Thousands of children from both sides of the divide in Northern Ireland have visited the peace village since its opening. It now attracts children from across Europe.

McAleese believes the opening of the park had a “cathartic” impact on remembrance of the Irish war dead. “A new generosity and willingness to listen to one another’s perspective became evident thanks to the persistence of those who brought the Island of Ireland Peace Park into existence.”

Paddy Harte and Glenn Barr died within three months of each other: Barr on October 24th after a short illness, Paddy Harte had been ill for some time.

They fell out after the opening of the peace park. The irony of that was lost on nobody including themselves and they were reconciled in recent years.

Harte said the purpose of the Island of Ireland Peace Park was to create a memorial that will “last for centuries and be as meaningful in 500 years time as when it was built”.

There can be no more enduring tribute to both men.

Ronan McGreevy is the author of Wherever the Firing Line Extends: Ireland and the Western Front published by The History Press