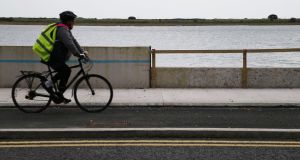 After a dispute with local residents, Dublin City Council agreed to reduce the height of the seafront wall by up to 30cm along almost half a kilometre opposite St Anne’s Park. Photograph: Nick Bradshaw

Dublin city councillors have voted to spend €500,000 to lower and reface part of the recently built flood defence sea wall in Clontarf, despite being warned it will have to be rebuilt in the future.

The wall was built as part of the €5 million Clontarf cycle path which opened last May following two years of construction.

After a lengthy dispute with local residents, the council agreed to reduce the height of the wall by up to 30cm along almost half a kilometre opposite St Anne’s Park.

The wall does not obscure the views of Dublin Bay for pedestrians and cyclists using the new path, and the section being reduced is not opposite any houses. However, the council warned if the wall was not lowered motorists would have restricted views of the sea.

The reduction in height would provide protection against a 100-year tidal event rather than the national standard of a 200-year tidal event, and for only half the allowance for sea-level rise expected by the end of the century, council chief executive Owen Keegan warned. “In addition, there will also be a cost for raising the wall at some future date, in line with the recommendations of the independent expert.”

The cost of the work is estimated at €230,000 to reduce the height of the seawall and €300,000 for stone cladding. This money would be taken from development levies ring-fenced for flood alleviation projects, Mr Keegan said.

Councillors voted 34 to 21 in favour of the move, with three abstentions.