No overall problem with teacher supply, insists Department of Education

Officials acknowledge there are ‘pinch points’ across key subjects 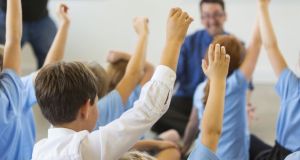 Over 5,000 permanent, full-time teachers have been hired since Minister for Education Richard Bruton was appointed, the department has said. Photograph: Getty Images

The Department of Education has insisted there is no overall problem with teacher supply but has acknowledged there are “pinch points” across key subjects.

While school managers and teacher unions say there has been a “collapse” in the numbers applying to be teachers, the department says the numbers graduating at primary and post-primary have remained relatively steady.

“Over 5,000 permanent, full-time teachers have been hired since Minister Bruton was appointed, almost 2,400 in primary schools and just over 2,850 in post primary schools,” a department spokeswoman said.

“All of these positions have been filled. There is no overall problem with teacher supply. The official figures support this.”

She said Minister for Education Richard Bruton was committed to addressing pinch points in subjects such as Stem – science, technology, engineering and maths – and foreign languages through measures such as financial incentives.

However, the Teachers Union of Ireland said the “crisis” of teacher recruitment and retention will continue to worsen until the process of pay equalisation for those appointed since 2011 is accelerated.

“All education stakeholders now acknowledge that there is an unprecedented crisis in the recruitment and retention of teachers,” said TUI president Joanne Irwin.

“However, it is regrettable in the extreme, and foolish, that the Government is still refusing to acknowledge or commit to the only guaranteed cure.”

She said even if graduates were to be “lured” to a training course in a certain subject area, there was no guarantee they will end up teaching for any length of time, particularly when they will be “discriminated against from the get-go in terms of pay”.

Fianna Fáil’s education spokesman Thomas Byrne said a key factor in falling numbers of applications was the expense of a two-year master’s course, which replaced the old one-year higher diploma.

“The cost of training keeps increasing and more and more of a burden is put on prospective teachers. We need to examine how we can alleviate the cost, especially in the Stem subjects,” he said.

“The situation simply isn’t sustainable if we want to attract quality recruits to the profession. There is also an issue with the prohibitive skills requirements for perspective teachers and I believe this is something that needs to be addressed.”

Mr Byrne said Fianna Fáil has been pushing for measures to encourage people to apply for teacher training courses, including the restoration of postgraduate grants.

The Department of Education also played down the issue of unqualified and unregistered teachers being used in schools. It said they were employed as substitutes in just 3 per cent of cases.

These figures relate to primary level only. The department does not have up to date information on the number of “out-of-field” teachers at second level who are teaching subjects which they are not qualified for.

School managers say this is turning into a “crisis” and that it is difficult to source qualified teachers in Irish, European languages, maths or science subjects.