Taoiseach arrives in Washington ahead of St Patrick’s day celebrations

The ongoing negotiations of Brexit are likely to dominate the visit 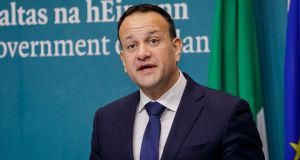 Taoiseach Leo Varadkar has arrived in Washington for the annual St Patrick’s Day visit to the US capital, amid growing concerns about the prospect of a no-deal Brexit.

The Taoiseach will attend his first official event on Wednesday when he addresses the US chamber of commerce at a lunchtime engagement. He will later address the Ireland Funds dinner at the National Building Museum in Washington.

The centre-piece of his three-day visit to Washington is a meeting with US president Donald Trump in the Oval Office on Thursday. Later in the day he will present Mr Trump and his wife Melania with the customary bowl of shamrock at a reception in the White House.

Mr Varadkar will also attend the annual Speaker’s Lunch on Capitol Hill on Thursday, which will be hosted by House Speaker Nancy Pelosi.

With increasing concern on Capitol Hill about the impact of Brexit on Northern Ireland and the Belfast Agreement, the ongoing negotiations on Britain’s terms of departure from the European Union are likely to dominate his visit to the US capital.

In a letter to British Prime Minister Theresa May sent on the eve of the Taoiseach’s visit to Washington, more than twenty members of Congress warned that a future free trade agreement between the US and the United Kingdom could be delayed “indefinitely.”

The bipartisan group calls on the British government “to do everything in its power” to prevent the imposition of a hard border between the Republic of Ireland and Northern Ireland.

The letter was spearheaded by Richard Neal, the chairman of the House Ways and Means Committee and Joe Kennedy III, the Massachusetts congressman and grandson of Bobby Kennedy.

“The consequences of the decisions you will make in the coming days will affect millions of people around the world,” the letter states. “The United States has a keen interest in many of the issues under discussion.”

It warns that there is “much at stake” if a hard border is re-imposed, including major disruptions to trade and commerce, the stoking of political and sectarian differences, and a potential return to violence. “This would put at risk all that has been achieved since the Belfast Agreement came into force in 1998.”

“Additional initiatives, such as a free trade agreement, may be delayed indefinitely if we are obligated to respond to potential crises on the island. We hope very much that such an outcome can be avoided.”

“The United States - our government and people- share a critical interest in the continued success of the Good Friday Agreement and the peace and prosperity it has brought to so many on the island of Ireland. Support for the Republic of Ireland and for a continued peace in Northern Ireland is strong and heartfelt in the US Congress. A continuation of the peaceful border between the two is critical for the future of all the people of both jurisdictions.”

The letter was signed by 22 members of Congress from both political parties, including Mr Kennedy, Republican Peter King of New York, Philadelphia Democrat Brendan Boyle and Elliot Engels, the chair of the foreign relations committee.

Mr Varadkar will address the annual Ireland Funds dinner tonight in Washington DC. This year the philanthropic organisation is celebrating four Irish and Irish-American women who have made their mark in their respective fields.

Gail Slater, the Dublin-born lawyer who is special assistant to President Trump on technology, will be honoured. So too will be Norah O’Donnell, the co-host of CBS’ This Morning programme, and a proud Irish-American. New Hampshire senator and former governor, Jeanne Shaheen will receive an award for her contribution to government and public service, while Tyrone native Sarah Friar, the chief executive of social networking service Nextdoor, will be recognized for her business leadership.

The Embassy of Ireland in Washington is also hosting an exhibition at tonight’s event, titled: “Blazing a Trail: Irish Women in America’. The exhibition will showcase the achievements of significant Irish and Irish-American women throughout history, and is part of a broader emphasis on women’s history by the Department of Foreign Affairs.

Since March 1st the Irish embassy in Washington has been highlighting the work of an individual woman each day on social media platforms. Profiles of these women will feature at Wednesday night’s exhibition.

The individuals include Mae Ella Nolan, the daughter of Irish immigrants, who became the fourth woman to serve in Congress, and the first ever woman to chair a congressional committee.

Kay McNulty was one of the six original programmers for the Electronic Numerical Integrator and Computer (ENIC) - one of the first digital computers ever built. Born in Donegal in 1921, she emigrated to Philadelphia with her family as a child, excelling academically in maths and the emerging discipline of computer programming.

As Mr Varadkar marks St Patrick’s Day in Washington in New York, Ireland’s ambassador to the United Nations, Geraldine Byrne-Nason, will be chairing the sixty-third session of the Commission on the Status of Women. The Commission is the second biggest annual meeting at the United Nations in New York after the General Assembly which takes place each September. Around 10,000 civil society representatives are attending the event which kicked-off on Monday. This year’s focus includes social protection and access to public services for women and girls across the world.