Times past: Wearing of the green goes back a long way

Whether pagan, savage, soldier or smoker, St Patrick’s Day occupies a special place among the Irish 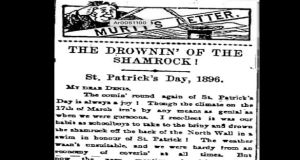 The Baltimore Sun of March 19th, 1859: There was a terrible riot among the Irish, near Baltimore, on St Patrick’s Day . . . fighting lasted three hours and “was as bloody as some skirmishes that have respectable places in history.”

As we approach St Patrick’s Day, the Irish diaspora always features heavily in news coverage. This is nothing new, and reports in The Irish Times from the mid-1850s up until the final St Patrick’s Day before the first World War broke out detail an array of activities, from rioting to concerts.

On April 12th, 1859, news was printed in The Irish Times about “a terrible riot among the Irish, near Baltimore, United States, on St Patrick’s Day”. The paper, citing a report in the Baltimore Sun from March 19th, stated that “weapons of various kinds were freely used, and 100 persons were injured, some of whom have died. The fighting lasted three hours”, the newspaper then quoted an extract from the Baltimore Sun about the fighting which was, “as bloody as some skirmishes that have respectable places in history.”

For St Patrick’s Day in 1896, Murty’s Letter, a column from The Irish Times back in the late 19th century, took the guise of a rambunctious Irish man writing to a friend who had emigrated to America, remembering the time when as boys they would partake in the tradition of swimming off the North Wall in Dublin in honour of St Patrick. “The weather wasn’t unsuitable, and we were hardy from an economy of coverin’ at all times. But now the very mention of such a thing is enough to freeze every sensation. St Patrick was a spring saint in them days. Now he’s a winter one, and no mistake! St Frigid!”

The “letter” continues with digs at the friend’s chosen home, “I ask you to receive my best and most grateful thanks for the bunch of shamrocks you humorously sent me back all the way from Denver, USA. I ought to tell the story of them for the praise of our country. You say they’re the growth of a piece of actual and real Irish earth that I despatched to you by parcel post as a present with shamrocks in and on it! I remember the gift, and your delight at gettin’ it, and I congratulate you on the inoculation of your barbarous Yankee mould with the sacred soul. Before I gave you this chance it was pagans and savages you were!”

A more formal diaspora event was highlighted in the newspaper in 1907, this time in India. “St Patrick’s Day was celebrated in truly brilliant fashion at the Saturday Club last night, when 65 Irish men from all parts of India gathered round one of the most festive boards ever laid out by the great Peliti.” Peliti was the Italian Frederico Peliti, whose restaurant Peliti’s was a hub of social activity in Calcutta. Rudyard Kipling was a fan.

On St Patrick’s night, they had a grand smoking concert, which also lasted into the small hours of Saturday morning

On March 25th, 1911, The London Letter in The Irish Times reported on the social events of St Patrick’s Day in the English capital, where Queen Alexandra continued the custom of presenting shamrock to the Irish Guards who paraded at Chelsea Barracks before Mass. The gifting of shamrock extended to animals, as the regiment’s dog, the “fine Irish wolfhound” named Queen Morc “was not forgotten, and her silver collar was adorned by a fine bunch”. One wonders what state the regiment was in given that the paper also reported, “The eve of St Patrick’s Day was kept up by the Irish Guards with a ball, which lasted until four o’clock in the morning. On St Patrick’s night, they had a grand smoking concert, which also lasted into the small hours of Saturday morning.” A smoking concert was pretty much as it sounded, a male-only live gig with plenty of smoking.

Posting shamrock far and wide was so popular, that advertisements for “shamrock seed post cards” appeared in the newspaper in the early twentieth century, such as those for sale in the Northern Publishing Office on Ann Street in Belfast in 1914. Pagan, savage, soldier or smoker, the wearing of the green goes back a long way.