Perhaps Cox could have merged the legal and the political, and got a lot of people off the hook, including the DUP 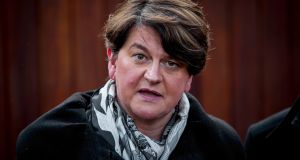 DUP leader Arlene Foster: she must be apprehensive that some of the party’s core vote is becoming jaundiced and fearful by its obdurate position on the backstop

There was a period between late on Monday night and around 11am on Tuesday when there was a chance of escape from the Brexit chaos. It was fleeting.

Early on Tuesday, the DUP, like an uncertain Cheltenham punter, hedging bets, tried to figure out if the deal struck in Strasbourg would succeed. For a while it looked like they might have a punt.

However, British attorney general Geoffrey Cox put an end to all, when, with his Gilbertian style and stentorian voice, declared that really there was no great change, that the UK was still locked into the backstop.

Curiously, Cox told MPs that politically he supported the prime minister’s deal. Clearly Cox is not familiar with a horse often run during the peace process stable, Creative Ambiguity.

Had he been up to date on the complexities of Northern Irish politics he might have fashioned a statement that merged the legal and the political, and got a lot of people off the hook, including, perhaps, the DUP.

Instead, he took the “courageous” route – to quote fervent Brexiteer Traditional Unionist Voice leader Jim Allister – eschewing the notion of politics as the art of the possible, and laid down a stolid legal opinion.

There is still a little time to run to March 29th. Perhaps a workable compromise can still be engineered. But time is running out, even if the DUP argued that there was still time to strike a “sensible deal”.

However, the general feeling is one of pessimism, especially in many political and business sectors of the North, where voters decided by 56 per cent to 44 per cent that they wanted to remain in the EU.

Leavers still may be confident that Britain and Northern Ireland will quit the EU, but they must also carry some anxiety that the nature of the leaving could be damaging to the North’s economy.

Certainly that is the message the DUP has faced at home from every quarter, including a weekend plea from 50 leading local companies effectively that they should sign up to the withdrawal agreement deal.

The list included heavy-hitting big employers such as agri-food concerns, the manufacturing, pharmaceutical and construction industries, the banks and universities. Many farmers and family-owned businesses say the same.

Businesses warn not just of job losses, but also of political instability. Here it cannot have escaped the DUP’s notice that so-called civic nationalism is on the rise in the wake of Brexit.Middle-ground nationalism has been antagonised, while there is a greater push for a Border referendum on a united Ireland. Yet the DUP stands firm against such lobbying.

For now the DUP probably feels it can rest relatively easy because ultimately it can always play the Orange versus Green card. Here it has had cover from the Ulster Unionist Party, but also Jim Allister’s TUV.

All shades of leading unionist political opinion agree that the backstop does create a border down the Irish Sea, and therefore is a threat to the constitutional position of Northern Ireland.

That will continue to be the DUP’s position pending some other form of words that is more than, to quote Allister, the “thin gruel” of the compromise announced in Strasbourg.

Equally, however, Arlene Foster, Nigel Dodds and Jeffrey Donaldson must be apprehensive that some of its core vote is becoming jaundiced and fearful by its obdurate position on the backstop.

Perhaps they privately wish that Cox had devised a more accommodating legal opinion on what was agreed in Strasbourg.

1 Coronavirus: What will reopen in Ireland’s phases to ease restrictions?
2 Next government could bring in work-from-home tax incentives – Taoiseach
3 Swimming ban at Dublin's Merrion strand due to poor water quality
4 Coronavirus: No new Covid-19 deaths reported in State for first time since March
5 Unconvincing account may take some heat out of Dominic Cummings controversy
Real news has value SUBSCRIBE