Shrove Tuesday was also known as Skelliking Day, which had ties to carnival and was grim for both men and women 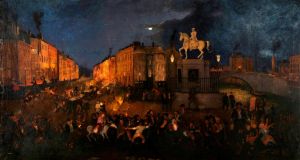 Every Shrove Tuesday until very recently, in the Co Cork towns of Blarney and Cobh, the girls’ school would close about an hour before the boys’, to give the girls a chance to get home safely. Sometimes you’d even see the local Garda sergeant making himself conspicuous at the school gates, in an attempt to temper the chaos that was about to unfold.

This was Skelliking Day – aka Skelliging or Skeleton Day – when, for as long as anyone can remember, the boys had free licence to chase the girls, corral them with ropes, tie them up and eventually douse them with water.

The day was a response to the prohibitions of Lent, for whose 40 days not only meat and dairy products but also sex were outlawed. Such religious austerity resulted in a particular concentration of marriages, or Shrove weddings, in the few days before Lent began, allowing the necessary consummation of the unions. One would think any couple who missed the deadline would have to wait until after Easter – but, as always, there was an Irish solution to an Irish problem.

Easter and Lent always fell later on Skellig than on the mainland, opening a window of opportunity for couples wishing to marry before the 40 days of austerity

The unlikely solution was connected to the medieval island hermitage of Skellig Michael, 13km off the Co Kerry coast, whose ascetic monks calculated the date of Easter differently from the rest of Christendom.

The whole of Ireland had initially used a different calculation table from the one adopted by Rome; it seems that, even though the rest of the country eventually conformed, Skellig Michael somehow maintained the older system.

It is also possible that the Skellig time difference originated when Ireland adopted the Gregorian calendar in 1752. That year, Wednesday, September 2nd, was followed by Thursday, September 14th.

Whatever the cause, Easter and Lent always fell later on Skellig than on the mainland, opening a window of opportunity for couples wishing to marry, and ingraining in the popular imagination the association between courtship, marriage and the Skellig Rock.

From the early 17th century, when large seine boats made the passage possible, Skellig became a place of Lenten pilgrimage. According to an 1895 account: “All the marriageable young people, men and women, in any parish, who are not gone over to the majority at Shrovetide, are said to be compelled to walk barefoot to the Skellig rocks, off the Kerry coast, on Shrove Tuesday night.”

Rather than being characterised by prayer and piety, the trip became an occasion of courting, drinking and wild debauchery.

Skellig lists – sheets of caustically mocking, extraordinarily defamatory poems – were written and distributed all over Munster around Shrove Tuesday

Out of this mix of associations and traditions came the Skellig lists, anonymous broadsheets of doggerel verse, pairing together and listing the virtues (and otherwise) of various men and women in a locality who supposedly wanted to go to Skellig to marry. These caustically mocking, extraordinarily defamatory poems were written and distributed all over Munster around Shrove Tuesday. Their anonymous authors often included themselves in the taunting verses, to defer suspicion.

Their scandalous assertions were eagerly consumed. Reading through a collection of printed 19th-century Skellig lists from Cork city, one can only be struck by how damaging they must have been.

“Next comes Maurice Egan, dat man wot the tail,
Which protrudes from its nest like the head of a snail,
With Miss Nancy Drinan he’ll go if he can,
But Nancy won’t have him bekase he’s no man.
Miss Puffmuffin Callaghan goes next for the shore,
With her waxbottom neighbour, the cordwainer Hoare.
While Kate Lynch comes on after, decked out in black silk,
On the bleak rocks of Skellig to skim her sour milk.”

The lists show no mercy. People were identified by the street where they lived, their dress sense, their profession and their appearance.

“The women were mocked for their preening and fashion:
From Dominick Street Hanna Barret is gone,
With an old cow’s tail slung round her,
Oh dear, what a boa the damsel has on!”

The men fared little better, lampooned for their drinking and lack of morals, and usually cast as miserable leeches looking to marry a wealthy widow:

“J-ck Re--en comes next, like a Laplander bear,
His strawberry phiz all enveloped in hair,
While he growls out a something in shape of a song
To the braw Widow H-g-es, whom he hugs all along.”

Skellig lists contained details that many people knew but few would ordinarily say in public, making them deeply offensive to the victims and their families, and particularly damaging to any potential unions. This is clear from a typical example from Glannagilliagh, in Co Kerry, from the schools folklore archive:

The activities of Skellig Night are clearly evoked in a wonderful painting, by the Cork artist James Beale, of the heart of the city in 1845. Bachelors and spinsters are being unwillingly paraded on donkeys and in wheelbarrows through the streets of the South Mall and the Grand Parade– the papers strewn in the foreground are clearly discarded Skellig lists – towards the scene of their ultimate humiliation: their dousing under a big water pump, much to onlookers’ amusement.

Skellig Night was an Irish manifestation of carnival. The eve of Lent’s 40 days of church-dictated fast and austerity was a time to embrace food and drink, boisterous violence and sexual promiscuity, just as it was at the Mardi Gras carnivals of the Middle Ages, and even as it still is, symbolically if not literally, at the modern carnivals of Rio de Janeiro, New Orleans and Venice.In 19th-century Ireland, after the culling of chickens, the gluttonous consumption of eggs, in the form of rich, sweet pancakes, was the order of the day. Copious amounts of alcohol added to the anarchy.

Parades were often accompanied by “rough music”, with participants banging on old pots and kettles with hammers and sticks. The manhandling of the unmarried men and women, often paired together and paraded humiliatingly before their final dousing under the pump or in the horse trough, was physically violent.

The Skellig lists were in addition a violent, emotional affront aimed at single men and women and their unmarried state. They were, in this manner, marked out as unproductive and a hindrance to the system of procreation and the continuity of human life.

Shane Lehane teaches archaeology, folklore and history at CSN College of Further Education, in Cork, and lectures in the department of folklore and ethnology at University College Cork. He is always interested to hear about local folk custom and tradition; you can email him at s.lehane@csn.ie