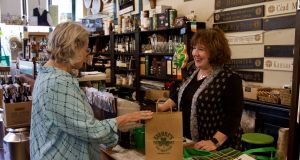 Sitting down for a cup of tea and uninterrupted conversation with Kerry Browne, owner of Browne’s Irish Marketplace in Kansas City, is a near impossible task.

It’s not that Kerry isn’t open to long, friendly conversations. Indeed, that’s the problem. She’s so friendly that she knows just about everyone that comes through the door of her business, and they know her.

A conversation with Kerry Browne becomes a community event.

Kerry is the fourth generation of the Flavin Family, immigrants from Co Kerry who came to the United States in the 1880s, settling in Kansas City. They opened a small grocery in the front room of their home in 1887, beginning a tradition of community engagement and enrichment that continues today.

Browne’s is the oldest continuously operated Irish business in North America, according to Enterprise Ireland. The family was not aware of this distinction until informed of it by Maeve O’Malley of Bord Tractale in 2006, just before the shop’s 120th anniversary.

“At first it was a bit intimidating, but we quickly realised it’s not about us,” says Kerry, who co-owns the business with her husband John McClain, whose family is also from Co Kerry.

“We are just part of a bigger story of community and the people who have lived and worked and celebrated life in this neighbourhood.”

By 1901, the Flavin business had grown so large that they constructed a new store with living quarters above a few blocks away, in the growing edge of Kansas City.

“I’m told they first put in the meat refrigeration unit and then built the walls around it,” says Kerry, pointing to a massive white cooler behind the deli counter. “My dad fussed about it almost every day, hoping it would last another year, and here, it’s still humming along.”

The name was changed to Browne’s in 1915 when the Flavin’s daughter, Margaret, took over the business. She had married Jim Browne, also from Co Kerry.

Jim served on Kansas City’s board of aldermen - similar to a city council - and was a founding member of an organisation that gave buying power to Irish and Italian grocers. Associated Wholesale Grocers is now the largest cooperative food wholesaler to independently owned supermarkets in America, with more than 3,800 locations.

Having survived the Great Depression and food rationing during the first World War, Browne’s Food Store thrived throughout the 1950s and became a focal point of the community. But the greatest challenge to its survival came in the late 1960s, when Kansas City expanded its innovative community college programme.

The new campus would be located directly across the street from Browne’s, requiring the demolition of 450 family homes; families that shopped at Browne’s, families that were part of the extended family that Browne’s customers had become.

“I think that’s when dad really struggled the most,” Kerry Browne remembers now. “It was a challenge both economically and emotionally. The neighbourhood that he had served was simply gone.”

Her mother Marjorie, whose family is from Camp on the Dingle Road, looked out the window one day and had an idea.

“She saw all of those men across the street working building the college campus and realised that they must be hungry,” Kerry says. “So, she started making sandwiches and all of a sudden Browne’s became Browne’s Market and Deli.”

In 1981, Kerry Browne and John McClain were good friends, still in college, when Kerry’s dad became ill and died. The store closed for just two weeks in June as the family coped with their loss.

Despite having grown up in the store, Kerry admits that she and her now husband didn’t have a clue what they were doing when they decided to take over the business.

“But like our family always has, we received so much advice and support and patience from our customers and friends,” she says.

Although the business was approaching its 100th birthday, Browne’s had never really celebrated its Irish heritage. It was simply a neighbourhood grocery store owned by an Irish family, in what had been a predominantly Irish community.

Kerry and John decided to up the game, renaming the business to Browne’s Irish Marketplace and importing predominantly Irish foods and products. Batchelors beans and peas are big sellers to this day, as is Barry’s Tea.

“People get really angry if we run out of Barry’s,” John says. Personally, Kerry is a passionate consumer of Yorkie raisin and biscuit bars, and dreads the summer months when temperatures make getting chocolate products shipped from Ireland more difficult.

“Of course, people can order all of this stuff on Amazon, but our customers buy it here for the atmosphere, for the experience,” she says. “You can’t get that community feeling from an Amazon box.”

Not even Amazon Prime comes with an Irish accent. Many of Browne’s employees are Irish secondary school students working in America during their transition year. One of their bartenders is from Co Donegal, and another employee is from Co Wicklow.

Kerry and John take a trip to Ireland in September or October every year to visit family, but also to connect with local producers of traditional Irish goods such as pottery, sweaters and lace. Family members in Co Kerry are always on the look-out for them too, frequently texting them with contact information and images of products that could eventually find their way to Kansas City.

Under Kerry and John’s guidance, Browne’s has also reclaimed its neighbourhood presence by hosting events for the community, including Irish cooking classes, Irish travel programmes and Irish music sessions. They serve traditional Irish breakfasts on select Saturday mornings, and host Irish whiskey tastings several nights a month. Browne’s is one of the largest distributors of Irish whiskey in the Midwest.

That renewed sense of community was essential in coping with the latest, most unexpected challenge to their now 132-year-old family business, which made the headlines back in Ireland. In the middle of the night of June 10th last year, someone spray painted “Immigrants not welcome” on the side of the historic building.

After the initial shock and disbelief, the couple and their customers rallied together in the same spirit that they have for five generations. The next evening, people just showed up at the store, giving hugs and support, telling their favourite stories about Browne’s from years past while scrubbing away the graffiti.

Recent immigrants from Russia and the Czech Republic were among the many faces that came to Browne’s for the first time to stand with this Irish-American family. One woman just came with a vase of daisies. A note arrived from a 92-year-old woman in Australia.

The High Kings from Co Down sent a note that highlighted Browne’s sentiment perfectly: “We will NOT let the haters win.”

“We were blown away by the outpouring of love,” Kerry says. “The person who did this was one little bit of negative energy, but this space is all about community and love, and it always will be, as long as Browne’s remains in business.”