An Australian bravely tells us what she’s learned about the land of saints, scholars and no notions 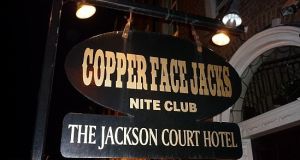 I was slightly hesitant to take this writing job and share what I’ve learnt about Ireland and Irish people since moving here from Australia. It’s dangerous having a foreign passport and putting anything that could be construed as criticism in print.

This is because the Irish have the same relationship with their country as I do with my mother. They can say what they want about it but God help anyone else who dares breathe a less-than-positive word. I can already see the Facebook comments: “She can go home if she doesn’t like it.” But here goes:

1 Presentation. If you are female, be prepared. Irish women will make you feel like a slob. In public they’re pressed, dressed and all seem to have mastered liquid eyeliner. I once caught my housemate ironing a blouse to go to Tesco and I’ve felt inferior since.

My favourite is a certain type of young bloke who lives between the two extremes of wearing either full tracksuits or three-piece suits like they’re about to make their Holy Communion. There is no in between.

2 Performances. Most – if not all – people I’ve met can do at least part of the original Riverdance. They bring it out at nightclubs, weddings, funerals. They also stand on tables and sing the national anthem at the end of the night. In Australia this only happens at sporting events, school assemblies and anti-immigration rallies but here it’s just the bar’s way of telling you to bugger off home. They will also cajole you into joining a sing-song at some point. This is a trap as they can all sing. You will tell them you really can’t sing. They will think you’re being modest and they’ll make you. Then everyone will understand that actually you really can’t sing. You will wish there wasn’t so many fecking things in rattling in that fecking bog.

3 Death. For a nation that lives life to the fullest, it is obsessed by death. I had always put down my family’s morbid fascination with the newspaper obituaries as one of their many eccentricities. But moving here has made me realise it’s not their fault – it’s their culture. Once I heard death notices being read out on a radio station that made the unfortunate choice to play the Bee Gees’ Stayin’ Alive straight after. The Irish just do death better than the rest of us. I’ve been to better Irish funerals than Australian weddings. Aussies are just awkward at these things. It’s all pre-paid funeral home package affairs with sad sandwiches and The Wind Beneath My Wings played at least once. Recently I had the rather shitty task of saying goodbye to two sound Irish women who had always gone out of their way to make me feel at home here. There was equal parts singing, crying and laughing and one hilariously inappropriate story involving vodka, a neighbour and accidental nudity. It was a proper celebration of who she was and the devilment she got up to. This is how all goodbyes should be said.

4 Persuasion. The best way to get anyone to do something they don’t want to do is to accuse them of being “no craic”. Whether it’s doing Jägerbombs or teaching you to Riverdance, it works. This has been used to trick me into going to Coppers too many times. But you can’t help it because there’s nothing worse than being no craic or even, heaven forbid, “a dry shite”.

5 Notions. Except, that is, “having notions”. Anything can be notions really. I’ve heard people say teeth whitening or shopping at M&S are discouraged as notions, but as a proud salad dodger with poor nutrition I wholeheartedly support this stance. I hope Ireland never changes. Australia is full of things like “activated almonds”, and you can’t go for a swim at Bondi without being in the back of some Instagram influencer’s post flogging vegetable capsules. All that’s standing between this happening to Ireland is their healthy suspicious of notions. Thank Christ.

6 Romance. It doesn’t seem to happen before midnight, and if you’re out-out it’s even later and not until you can plausibly blame it on booze if it goes wrong. As one colleague told me, “Irish people don’t make a move on each other until 2am”. Giving rise to my favourite Irish expression for picking up a less than desirable but temporary romantic partner, delightfully called “the 10-to-two, you’ll do”. That’s why late-night kebab shops are great places for impromptu first dates.

7 Out v out-out. They sound alike but are worlds apart. One could be gentle pints by the fireplace listening to some old boys in flat caps playing trad tunes. The other could end up performing both parts of the Grease Megamix when you’re not even at karaoke and meeting the love of your life over a spice bag. However, “jeans and a nice top” – thanks, Aisling! – is a suitable outfit for both.

8 Unpretentious. Speaking of night life. I went home to Sydney’s inner west a few weeks ago, where you would not get away with playing the Macarena in a DJ set with a straight face. At the warehouse parties (grand in theory, until it’s 5am and you realise the “toilets” are milk crates in an alley), you’re likely to hear German techno and maybe, on a really good night, a tiny bit of ironic Italo disco. Songs with lyrics (at least English ones) are banned. You can imagine my relief when I got to Dublin and could enjoy the Abba mega-mix in a respectable nightclub with no shame. The Irish don’t give a shit about being cool, a tune’s a tune whether it’s on your mam’s playlist or not. Ireland is not a place for pretenders.

9 But it is a place for hospitality. When someone asks you to stay over, you should take them up. Especially if there is a mammy (or friend with mammy tendencies) in the household. A few months ago I sent a message to my friend, asking her if it was still okay to stay at hers. “Of course,” she replied. “Mam will be out hoovering the driveway in preparation.” She will most definitely put you in the good guest room, with the good soaps and the good ironed bed sheets. She’ll also have you fed and watered and potentially married off to one of the younger, single males in her family by 9pm. However, the other members of the household will need a Valium and lie-down after being forced to Marie Kondo the shed in case visitors happen to inspect it, but at least you’ll be looked after.

Which is really the best part of living in Ireland. The being looked after by strangers, the invitations, the inclusion. So please don’t tell me to leave if I don’t like it. Because I really do. (Except for the coffee.)