Mapped: Where do all the Ministers go on St Patrick’s Day? 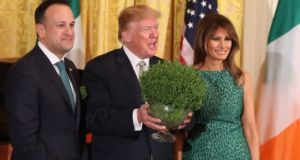 Taoiseach Leo Varadkar presents US president Donald Trump with a bowl of shamrock as Melania Trump looks on at the White House in 2018. Photograph: Niall Carson/PA Wire

The number of countries visited by the Government on St Patrick’s Day has increased sevenfold since 2011 with a greater focus on Europe, Asia and South America.

Along with the Taoiseach, it is primarily Ministers and Ministers of State who travel for St Patrick’s Day with the Government chief whip, Attorney General, Ceann Comhairle and Cathaoirleach of the Seanad also occasionally travelling abroad.

While the Taoiseach always travels to the United States, the destinations of other ministerial posts varies year on year.

Among the trends since 2011 is the government’s strong emphasis on visiting US cities which, for four of the nine years, is the most visited region. Washington DC, New York, Boston, Atlanta, Chicago, San Francisco, Philadelphia and Savannah are the most frequently visited cities with destinations such as Washington DC, Boston and New York often visited by at least two representatives.

While the number of US cities Ministers will visit this year is down by a quarter from 2017, the Government is sending the highest number of representatives to the country since 2011, with nine members of Government travelling Stateside.

The following interactive map shows the location of all the Government's St Patrick’s Day visits from 2011 to 2019. This map can be explored by year, representative and area. The database has been compiled based on Government press releases and articles detailing the destinations. Click on the 'Zoom Home' button on the left hand side of the map to concentrate on the particular area selected. If you are viewing this on mobile please click here to explore the map.

Europe has always been an important destination for St Patrick’s Day, but 2019 and the looming shadow of Brexit has seen the number of countries visited rise by 76 per cent compared with 2018.

Typically just one Minster has visited European countries, often taking in a number of neighbouring states, with the exception of England, which in 2011 and 2018 was visited by two Ministers.

London is visited every year, while Birmingham, Manchester and Liverpool, cities with large Irish populations, have also been part of the itinerary some years.

However, for the first time since 2011, two Government Ministers will visit Germany, France and the Netherlands, countries traditionally visited by only one Minister.

When it comes to Asia, China and Singapore are the top destinations for Ministers with visits to both during seven of the nine years in question. India, South Korea and Japan are also popular, and the Government will send a representative to eight Asian countries this year, the highest since 2011.

With the exception of 2016, Australia and New Zealand are always visited for St Patrick’s Day. As of 2017, two Ministers have visited the region with one of the Ministers also taking in a visit to New Zealand. This year visit marks the Government’s first visit to East Timor, with Minister of State for Housing Damien English travelling to the country.

Although visits to North America have been dominated by the United States, Canada has been visited every year except for 2011 and 2016 with Toronto always on the itinerary. Since 2017, two Ministers have been sent to visit the country, broadening the cities visited to Montreal, Quebec, Ottawa, Vancouver and Calgary.

Mexico has also been a target destination (2014, 2015, 2018, 2019), while Cuba will be visited for the first time this year by Minister of State for Disability Issues Finian McGrath.

Among the lesser visited regions, Lebanon and United Arab Emirates (UAE) are the top two destinations for St Patrick’s Day trips in the Middle East. Lebanon, where Irish troops are stationed as part of United Nations Interim Force, is always visited by the Minister for Defence, while trips to the UAE have been undertaken by a variety of different Ministers and the chief whip. Israel has been visited twice in the past nine years (2013 and 2018), while Palestine has been visited once as part of the St Patrick’s Day programme (2013). Both were visited by defence Ministers.

Africa has been the least-visited region, with Ministers travelling there just four years since 2011 with trips focused on south and east Africa.