Homeless asylum seeker forced to sleep in mosque during snowstorms 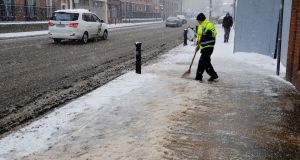 A homeless asylum seeker had to sleep in a mosque during the Beast from the East snowstorms last year after he was told there was no room at any direct provision centres in the country.

Despite repeated warnings that he would be forced to sleep rough during the prolonged cold spell, the Reception and Integration Agency (RIA) refused him accommodation on the basis that there was none suitable.

Ombudsman Peter Tyndall highlights the case in his latest report, which condemns recent arson attacks at new direct provision centres in Co Leitrim and Co Donegal, which he says has worsened accommodation pressures.

The case is among 148 complaints to the Ombudsman from refugees and asylum seekers living in direct provision centres last year.

Most related to the refusal of requests to transfer to other centres (32), facilities at direct provision centres (20), accommodation (14) and refusal to readmit residents to centres (13).

The Ombudsman intervened after a non-governmental agency (NGO) took up the case of the homeless asylum seeker. The man had been housed at a direct provision centre and left in November 2017 to live with his partner. When the relationship ended he became homeless.

While staying with a friend on a temporary basis, the man asked to be readmitted to the direct provision centre but was refused twice.

In a letter to the NGO, the RIA said it “particularly” noted the man’s “fears that he may have no alternative than to sleep rough in the coming weeks”.

But it added that “unfortunately we are experiencing an unprecedented shortage in our accommodation at the moment and as a result cannot locate any suitable vacancies”.

Mr Tyndall said the man was sleeping rough by the time he intervened at the request of the NGO.

“He said the Islamic Centre had allowed him to stay there during the freezing temperatures in late February and early March 2018, but he did not know how much longer it would allow him to stay,” Mr Tydnall’s report says.

“At that time, he was living on the streets during the day as he could not find shelter during daylight hours.”

At the request of Mr Tyndall, the RIA “reviewed” its decision and offered the man a place, which he accepted.

Referring to the arson attacks on two planned new centres in Rooskey, Co Leitrim and Moville, Co Donegal, in January, he said he wanted to “add my voice to the many people and groups who have condemned these attacks which are completely unacceptable”.

“With this capacity pressure, centres have found it logistically more difficult to facilitate residents’ requests to move accommodation within centres,” he said.

“As a result, RIA is facing greater challenges in facilitating requests for transfers from one centre to another.”

There were also complaints about food, lack of cooking facilities, lack of children’s facilities, availability of transport, access to English language classes as well as cleanliness and hygiene at direct provision centres.

Mr Tyndall restated his view that direct provision is not a suitable long-term system for those waiting for a decision on their asylum application.