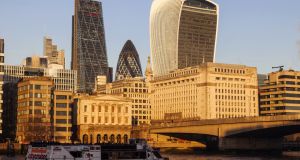 Optal is seeking to diversify its operations away from the UK after Brexit. Photograph: Prisma by Dukas/UIG via Getty Images

The Central Bank has authorised Optal, one of Europe’s fastest-growing fintech firms, as it seeks to diversify its operations away from the UK after Brexit.

The company has already opened its Dublin office, from which it will avail of EU passporting rules to offer its services into other member states. Headcount in Dublin is set to grow to nine employees, and the company hopes to pick up new Irish business from its operation here.

Darragh Deady, who will act as general manager of the firm’s Irish operation, Optal Financial Europe, said a “significant” portion of the firm’s business was in the EU, “so we needed to ensure continuity for these customers post-Brexit”.

The firm, which was founded in Australia in 2005, was first regulated in the UK in 2014. Mr Deady said the company had engaged with the IDA before choosing Dublin as its post-Brexit base of EU regulatory operations, but said a hotbed of financial technology firms large and small was a major part of its reason to relocate here.

“It’s definitely changed a lot,” Mr Deady, who had been working with Optal in the UK prior to returning to run the company’s Irish office. “The fintech scene is buzzing in Ireland and it’s great to be a part of it. It’s definitely a scene here, and can be looked at as a very credible alternative to London,” he said.

The financial services and fintech sector provided a “good talent platform for us to draw from”.

He said the firm had no complaints over the Central Bank’s application process, saying it was “definitely thorough, but they were very open and transparent from the start”.

“It was very clear what they expected from us, and what they wanted to see. They gave it the appropriate level of rigour that you’d expect,” he said.

Optal counts among its client base major insurance firms including Allianz, which uses the technology for claims payments. Its licence allows the company to issue and redeem e-money, as well as provide payment services. It is one of the first e-money licenses issued by the Central Bank. E-money is a digital form of cash that involves customers buying the electronic equivalent of coins and notes.

The company uses virtual account number (VAN) technology to issue users with a 16-digit Mastercard account number, which is then used to make a business-to-business payment.