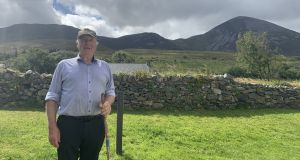 Val Dempsey (73) who has been climbing Croagh Patrick on Reek Sunday for more than 30 years. Photograph: Ellen O’Riordan 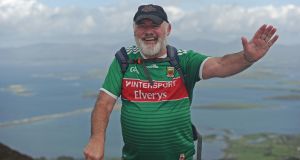 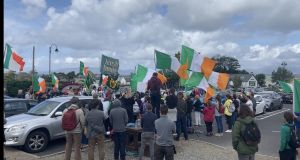 A number of people held a protest in the car park at the base of the mountain at the decision to cancel the pilgrimage. Photograph: Ellen O’Riordan

Summer would not be complete for 73-year-old Val Dempsey without a venture up Ireland’s holiest mountain on the last weekend of July.

From Minane Bridge, in Cork, Mr Dempsey has travelled to Mayo for Reek Sunday for more than 30 years, including in 2015 when pilgrims were warned to stay away due to wild weather.

“Once I came here I just kept coming,” he said, sipping a coffee at the mountain’s base next to his wife Mary Dempsey.

“There are often days where you come and you cannot see the top of the mountain at all due to the mist. Today the weather is fantastic,” he said.

Factoring in Covid-19 restrictions this year, the pair decided to do “just a little bit of the mountain for the exercise and the tradition.”

Reek Sunday usually brings thousands of pilgrims - many of them barefoot - to climb Croagh Patrick each year.

However, Archbishop of Tuam Michael Neary had encouraged people to attend a local Mass this Reek Sunday rather than take part in the traditional ascent.

Echoing the sentiments of local church leaders, gardaí, Mayo Mountain Rescue and locals in Murrisk asked people to stay away after deciding the normal infrastructure and hundreds of volunteers could not be deployed due to Covid-19.

John Graham (60) only realised it was Reek Sunday upon arriving at the foot of the mountain. From Belfast, the “regular walker” had not heard the warnings to stay away and has been enjoying climbing a number of mountains as coronavirus restrictions have eased.

“It is outside, it is not hard to stay two metres apart,” he said. “ I am fairly risk-averse so I wouldn’t come if I thought it wasn’t safe.”

Among those who opted to climb was a group of five men from Co Meath who came to Westport for a weekend staycation.

“This has been on our bucket list. I wasn’t aware Reek Sunday existed,” Allan El Atrash (28) said. “If there was some sort of Garda brigade here we would have turned around.”

Working at a tea and coffee stand beside the walkway, Jackie O’Grady said the place was “much quieter” than on a usual Reek Sunday.

“Usually it is mental. The car park would be full and they have to open fields for extra parking. It would be just crowds and crowds of people,” she said.

As the morning wore into afternoon, about 100 people carrying tricolours and “Irish Republic” flags arrived to protest the official cancellation of the Reek Sunday pilgrimage.

News of a “rally by the reek” had been spread on social media and encouraged “patriotic pilgrims” to “protect our Christian heritage”.

One protester, who gave her name only as Bridget, said she had travelled from Dublin and was attempting the pilgrimage for the first time. She said it was “disgusting” that pilgrims were being asked to stay away.

“Why would they stop people from coming?” she asked.

Anti-lockdown and anti-immigration activists Gemma O’Doherty and John Waters addressed the protesters, who cheered loudly when told Irish people will “take their country back”.

In a lengthy speech about immigration, Ms O’Doherty claimed Ireland’s culture, heritage and Christian faith is being “wiped out” and said people are terrified to question what she called the coronavirus “scamdemic”.

After speeches and a rendition of the national anthem, many protesters started to climb.