Reek Sunday: climbers on Croagh Patrick down 90% as pilgrimage cancelled 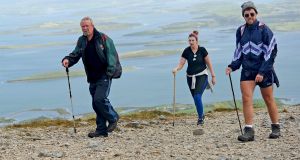 There was a sharp fall in the number of people climbing Croagh Patrick on Sunday after the annual Reek Sunday pilgrimage was cancelled due to the coronavirus. Photograph: Conor McKeown

“People must have headed the advice,” said a spokeswoman, who added that “it was busier over the last few weeks than today.”

A factor in the numbers who did turn up on Sunday was the good weather, she said.

Parish Priest of Westport Fr Charlie McDonnell said the numbers at the mountain on Sunday were “the smallest attendance of any Sunday this year” which he estimated at “between 400 to 500 compared to the normal 5,000” on Reek Sunday.

The numbers were “very manageable and everyone who really wanted to, could climb.”

Appeals for people to stay away this year had been “very successful,” he said, and “the local people were delighted.” Those who did turn up “were made feel welcome” he said

Normally the Reek Sunday pilgrimage begins at 6am when all car park spaces would be full. “It was noon before that happened today,” he said.

Archbishop of Tuam Michael Neary had encouraged people beforehand to attend Mass in their own parishes rather than take part in the climb today. “This year for obvious reasons we have had to cancel the pilgrimage,” he said.

Speaking at the vigil Mass in St Mary’s Church in Westport he observed that Covid-19 “had effectively shut down the whole world. The results will be far-reaching in terms of physical, psychological, emotional health and well-being as well as for the economy,” he said.

It was also “a huge challenge to our faith.” Yet it had “brought out the best in people. There had been was “neighbourliness, voluntarism and the huge sacrifices made by individuals and families.

“Our faith will not provide easy answers, yet faith will help to provide perspective which will enable us to address the challenges,” he said.

But, he warned, “we cannot and should not expect to return to where we had been prior to Covid-19.”

Many volunteer stewards were cocooning and “coming to the assistance of someone who had fallen would create unnecessary public health risk, they said.”

It was also the case “that Reek Sunday fell outside the criteria laid out in the roadmap for reopening the country” and “the public health advice is clear and we absolutely abide by it,” they said.

Meanwhile the parish priest at Knock has announced that the National Novena to Our Lady of Knock there next month has been postponed “until perhaps later this year, depending on latest Government guidance.”

Fr Richard Gibbons said “having discussed at length the logistics, health and safety of organising the Novena, it is with heavy hearts that we have decided to postpone it. After careful assessment of all aspects in line with current government guidelines, we feel that this is the right thing to do.”

The Novena takes place every year from August 14th to 22nd and attracts upwards of 150,000 pilgrims.

The Shrine has gradually reopened for Mass in recent weeks, with restricted capacity, but “even though the Shrine grounds cover over 100 acres, it would be impossible to control in a safe manner large outdoor gatherings which would undoubtedly come for the Novena,” said Fr Gibbons.

The Shrine however will remain open with daily Masses in the Basilica at 12 noon, 3pm and 7.30pm with restricted capacity and on a first-come, first-served basis. Confession will also be available.