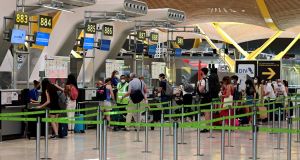 Travelers stand in a queue in front of the baggage drop-off desks at Terminal 4 of Adolfo Suarez-Madrid Barajas international airport, in Madrid, on Sunday. A surprise 14-day quarantine for all UK residents arriving from Spain was imposed at midnight. Photograph: EPA

Hundreds of Northern Irish holidaymakers flying to and from Spain and its islands on Sunday learned that they must quarantine for 14 days when they get home due to fears of a second wave of coronavirus cases.

The new restriction came into force from midnight on Saturday and was imposed after a rise in Covid-19 cases in Spain.

It came after the Spanish health ministry reported 971 virus cases on Thursday and 922 on Friday.

Passengers arriving into Belfast International Airport on Sunday from Malaga, Barcelona, Alicante, Palma de Mallorca and Ibiza knew they must self-isolate for 14 days, while those heading to destinations such as Lanzarote and Mallorca were also aware that they must do the same when they return home.

The North’s Minister of Health Robin Swann said the decision was made following medical and scientific advice and “was not taken lightly”.

“I have always said I will move swiftly and take the necessary action to ensure our citizens are protected,” he said.

“I have spoken with my counterparts across the UK and we agree that the recent upsurge in new positive cases in different parts of Spain are a cause for concern,” added Mr Swann.

“I will continue to monitor the situation in Spain and other countries and make the changes to the regulations when necessary,” he said.

The quarantine measures apply to mainland Spain, the Canary Islands and the Balearic Islands such as Mallorca and Ibiza.

The SDLP’s health spokesman Colin McGrath said that immediate testing should be made available to returning Spanish holidaymakers.

“This will be a shock to people returning from Spain in the coming days as they will now have to make arrangements regarding work and other domestic matters and prepare for 14 days of isolation,” he said.

“I hope that testing will be made available quickly for these people so a quick result will enable them to return to work sooner,” he said.

“Many people will now have to take the decision not to travel on their holidays and this will be a blow to them. I feel especially for families with children who may now have to explain why they cannot travel,” added Mr McGrath.

“This highlights the benefits of a ‘staycationing’ and with the popularity of Spain will be a knock to the tourism industry there and to the travel industry here,” he said.

Sinn Féin junior minister Declan Kearney said the Spain quarantine restriction demonstrated “the need for anomalies and contradictions to be addressed between the administrations in Ireland and Britain regarding international travel”.

“From the outset it never made sense for travellers coming into the North of Ireland from Spain to be exempted from 14 days quarantine, while others flying into the South were expected to self isolate,” he said.

“However, there are far too many contradictions in public health policy overseeing international travel, shared between the administrations North and South, and then between Britain and Ireland, within the existing common travel area,” he added. “There should be no limits placed on how to maximise common sense cooperation on an all-Ireland basis, and between Britain and Ireland.”