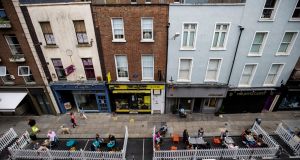 This “continental” cafe-culture scene was facilitated by the pedestrianisation trial of parts of South William Street, Drury Street, Dame Court, South Anne Street and Duke Street, which will be repeated for the coming three weekends.

The fencing lent a distinctly more convivial atmosphere than the steel barriers used in the weekend traffic closures at College Green last year, and while the measures are temporary, they gave a sense of how these streets could operate with full-time pedestrianisation.

“I would like to see it extended,” said David Pankowski, who was having lunch with his family outside Ukiyo on Dame Court. “The businesses will need this to get back up and running and we were just discussing that it probably will make us come out to cafes more.”

The Pankowskis, originally from Seattle but living in Dublin for two years, had been looking forward to restaurants reopening. “We like to eat out, but we are still a little uncomfortable about eating inside restaurants,” Gina Pankowski said, “so this is great, as long as it doesn’t rain”.

Over on Drury Street, Elaine O’Keefe, who travelled into town from Lucan, said weather shouldn’t be a barrier to making the scheme permanent.

“My partner is from Belgium and the weather is pretty much identical to here and they have outdoor seating all year round. Particularly on a street like this, where there are lots of cafes, it works really well.”

Ailbhe Cullen from Newbridge previously lived on campus at Trinity College and said the atmosphere was similar.

“When you would go on to the campus the noise would suddenly drop, because the buildings would block the traffic noise, and it very much feels like that here. I really would love to see it continue, I can’t see a reason to have cars back in these small streets.”

While the weather was somewhat mixed over the weekend, and restaurants and cafes had not installed umbrellas over the seating areas, the initiative still proved a definite boost for business, according to Karl Purdy, who runs Coffeeangel on South Anne Street.

“We are delighted with it, the street has been transformed. It’s something I pushed on social media out of a sense of desperation, but it turned out that with the city council, I was pushing an open door.”

While cafes and restaurants had been permitted to provide takeaway services during the lockdown, there had been very little demand in the city centre, Mr Purdy said.

“Dublin 2 is hugely dependent on offices and with people working from home there was no custom, but this is the busiest we’ve been since lockdown.”

The feedback has been “unanimously positive” from customers and other businesses on the street, he said. “I think there is a consensus to have it full time. I’ve ordered the umbrellas now, so I’d certainly like to see it made permanent.”

Non-food businesses might be expected to be ambivalent, if not wary of pedestrianisation, but Declan Abrahams of Abrahams tailors on South Anne Street said he would be fully in favour of permanent pedestrianisation.

“I think it’s terrific. I’ve been here sine 1982 and I had never seen the city so quiet, it took a hell of a battering but this is bringing people back in.”