Chris Johns: €30bn in public borrowing? I bet it will be higher 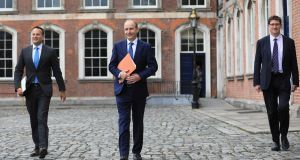 Faced with an unknowable future with few apparent upside risks and plenty of the downside variety, the Government was correct to surprise with the size of the July stimulus package. Photograph: Julien Behal Photography/PA

The Central Bank of Ireland this month announced it has given up economic forecasting. It was a semantic but nonetheless significant move. The Central Bank’s projections are now scenarios rather than forecasts. Hopefully, this recognition of reality is a permanent change.

At the best of times that word forecast implies a degree of certainty and precision that is unwarranted. The Central Bank was quite right to signal that any guesses about our economic and financial future are even more uncertain than usual. The scenarios explored by the bank ranged from a phased reopening of the economy to something much more severe. Which scenario is more likely is a question better answered by doctors and scientists, not economists.

The bank also looked at Brexit scenarios ranging from unattractive to downright ugly. The mathematically-inclined observer might be tempted to ask whether the economic consequences for Ireland of Covid-19 and Brexit, taken together, are additive or multiplicative.

Without knowing much about where the economy is heading, the Government has nevertheless to make decisions about the journey. In some ways, it’s like driving a car with very limited visibility. Accelerate or break? How much useful information can I glean from the rear view mirror? Which direction to turn the steering wheel? In normal times the windscreen is murky. Today, it is completely opaque.

Making big decisions in this environment is an unenviable task. Broadly speaking, the new coalition Government made a good fist of it this week. Looking at the next few months, the economic outlook is more uncertain than ever and fraught with obvious risks: the full consequences of Brexit begin in five months time. Deal or no deal, those consequences are going to be negative. The only question is over how big.

Faced with an unknowable future with few apparent upside risks and plenty of the downside variety, the Government was correct to surprise with the size of the July stimulus package. On top of what it has done already, the €7.4 billion package was, appropriately, a big deal.

We are not alone: globally, total additional fiscal support measures now amount to something like $11 trillion (€9.4tn). Government debt as a proportion of global GDP has just gone over 100 per cent. All these numbers are going to be a lot higher by the time this is all over. The Taoiseach suggested that public borrowing would hit €30 billion this year. I’d bet on a higher number. Minister for Finance Paschal Donohoe will have to have another big package in the autumn.

Inevitably, the devil is in the detail. While the overall size of the package figure looks to be appropriate, some of the measures didn’t make an awful lot of economic sense. One of the old ways of doing things that looks destined not to change is the inclusion of political rather than economic measures. If there are economic facts of life that are fixed forever they include annual Health Service Executive budget overruns of about €750 million and additional supports for house prices.

It would be churlish to be too critical. Railing against politically-motivated spending and taxation decisions is akin to arguing with the tide. If you thought the housing market was in serious trouble there is a case for supporting it, even via quick and dirty measures. Housing is linked to consumer spending in all sorts of ways and it is the consumer that the Minister for Finance is trying to encourage to spend.

There are plenty of property pessimists but their case, to me, looks weak. For all sorts of reasons, particularly low (and probably lower) mortgage rates for the foreseeable future, I can see property prices being relatively well supported.

That point about encouraging people to spend, particularly on staycations, does have a logical flaw. One arm of government, the fiscal authorities, wants to see more private-sector spending. The more there is of that, the less government has to do to make up for the shortfall. Meanwhile, every other arm of the State is trying its best to terrify the population, to keep people away from each other, and away from most spending activities. There is an obvious inconsistency.

The decision to cut VAT looked particularly odd. While we might say that its cost, €440 million, is neither here nor there in the context of quarterly multi-billion packages, somebody needs to ask about value for money. In particular, could that cash have found a better home?

This was a package mostly directed at business and jobs. Nevertheless, it was surprising not to see higher education much mentioned. We’ve had a third level funding problem for at least a decade. Income from foreign students is likely to fall, possibly dramatically, for obvious reasons. While there are mutterings about forthcoming financial help for higher education, its omission from the July stimulus was a missed opportunity. In particular, the taxpayer would have got a much bigger bang for their buck if that €440 million had been allocated to universities.

There are obvious connections between education, health and jobs. Universities are even more important than that. We are beginning a conversation about how our cities and towns can be repurposed in a post Covid-19 world. There is plenty of evidence from around the world that suggests one way of ensuring vibrant communities is to have a decent university or two at the heart of them.