Coronavirus: No new deaths and 12 new cases confirmed in the Republic 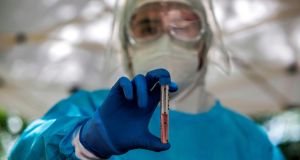 No new deaths from Covid-19 and 12 new cases of the disease have been confirmed in the State.

The latest figures were reported on Sunday evening.

There has been a total of 1,764 Covid-19-related deaths in the Republic, while a total of 25,881 cases of the disease have now been confirmed here.

Meanwhile, Tánaiste Leo Varadkar has admitted plans to monitor people travelling into the State from countries that are not on the “green list” need to “tighten up”.

He said: “We’re going to look at other measures as well, for example, the possibility of requiring people to have evidence of a negative [Covid] test prior to travelling from some countries.”

Mr Varadkar made the comments on RTÉ’s The Week in Politics.

He also raised concern that holidaymakers from Northern Ireland are allowed to travel to 59 countries without having to quarantine on their return there, while the Republic’s “green list” of countries for safe travel features just 15 nations.

However, Mr Varadkar said on Sunday that the Northern Ireland Executive has been “very clear” it does not want to have an all-island approach to its travel arrangements.

He said it will be one of the issues discussed at this week’s North-South Ministerial Council meeting in Dublin.

He added: “Certainly in any conversations that I had with the First Minister [Arlene Foster] and anything she said since, they’ve been very clear that when it comes to travel they want to stick with the Common Travel Area with Britain and won’t be restricting travel between Britain and Northern Ireland.”Additional reporting: – PA