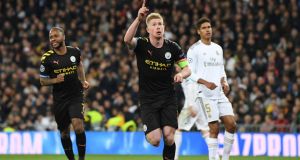 Manchester City’s Champions League last-16 second leg against Real Madrid will still be played at the Etihad Stadium despite the 14-day quarantine rule imposed on people travelling from Spain to the UK.

The regulation was imposed by the government from Saturday night. The decision means those coming back from Spain will have to self­ isolate for two weeks upon their return. The move followed a dramatic increase in the virus in Spain where nearly 1,000 infections have been reported in the past two days.

City play Real in less than two weeks on August 7th and it is understood that the exemption announced by Culture Secretary, Oliver Dowden, for sports teams and film crews will allow the match to take place at the Etihad as planned.

Pep Guardiola’s team hold a 2-1 advantage from the first leg, with goals from Gabriel Jesus and Kevin De Bruyne securing a famous comeback victory at the Bernabéu. The winner of the quarter-final will face one of Napoli, Barcelona, Chelsea or Bayern Munich in the semi-finals, which are due to be played as part of a mini tournament in Lisbon next month.

It is yet to be confirmed whether the Women’s Champions League will be affected, although a similar exemption could apply to the mini tournament in Bilbao next month. Arsenal, who are due to face PSG, have reached the quarter-finals after five seasons out of European football, while Glasgow City will play Wolfsburg. - Guardian

1 Born to ride, born to win: Sam Bennett, the making of a green machine
2 Suarez’ Italian language exam rigged according to prosecutors
3 Awarding of 2023 Rugby World Cup to France part of Laporte investigation
4 West Ham boss David Moyes tests positive for coronavirus ahead of Hull game
5 A kick in the teeth for sports, and a nail in the coffin for communities
Real news has value SUBSCRIBE