More than half of buses inspected by RSA fail safety checks 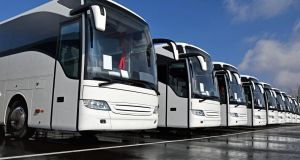 Some 51 per cent of the 873 buses inspected by the RSA in the past year were not compliant with roads safety standards. Photograph: iStock

More than half of buses inspected by the Road Safety Authority (RSA) in the past year have failed road safety tests, according to data released by the authority.

Some 51 per cent of the 873 buses inspected by the RSA in the past year were not compliant with roads safety standards, while nearly a third of them were found to have “major” or “dangerous” defects.

A total of 445 buses failed to comply with safety standards over the past year. Of these, 268 were operating with “major” defects while 37 had “dangerous” defects.

The RSA noted that the figures did not solely represent school buses and that they also included private buses carrying passengers outside of school transport. The authority said it used a strategy of “targeting those thought to be most at risk of non-compliance both at the roadside and when conducting inspections at operator premises”.

Therefore, “the figures are not indicative of the compliance of the national bus fleet but are rather our enforcement findings,” said the RSA in a statement.

“Any vehicles found to be in a dangerous condition at a roadside check are taken off the road and/or not allowed to continue their journey until dangerous defects have been rectified,” said the statement. “The RSA believe that the safety of all buses and in particular those used to transport children is of utmost importance.”

It is understood that the head of the RSA Liz O’Donnell raised concerns about Bus Éireann’s school bus safety record last year. In a letter to Bus Éireann chairman Aidan Murphy, released by RTÉ last week, Ms O’Donnell noted that while the bus company had taken positive action to address concerns with the roadworthiness of school buses operating under the Schools Transport Scheme, RSA research showed “little in terms of improvements”.

“I believe it is important that engagement between our organisations is ongoing and monitored to ensure our shared objective of improved quality and standards of school buses is realised,” wrote Ms O’Donnell.