Gallagher has no problem picking up four council nominations 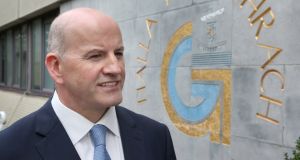 Sean Gallagher at Galway City Hall on Thursday where he was seeking a nomination to run for president. Photograph: Joe O’Shaughnessy

The ease with which Sean Gallagher cruised to four council nominations on Monday gave an inkling that the presidential election might turn out to be something other than a coronation for Michael D Higgins.

In a homegrown version of Super Monday, a total of 11 councils discussed or voted on presidential nominations. And in an impressive surge over six hours, Gallagher had secured his required four nominations by mid-afternoon.

The first came from Roscommon at 9.30am, followed by Leitrim at lunchtime. In the meantime Mayo also backed him, though that council was not expected to vote on Monday. The Cavan-born businessman secured his fourth shortly after when Wexford also supported him.

It was not all one-way traffic. Senator Joan Freeman, the founder of Pieta House, had also become an official candidate by the end of a long day. She had one endorsement from last week, and secured another three during the course of a long Monday, from Galway County Council, Galway City and Fingal.

Gavin Duffy also moved closer to the threshold, when Carlow County Council approved his nomination in the afternoon and Wicklow in the evening. That left him with three nominations. With Louth, which votes next Monday, guaranteed to support him, it is certain he too will be an official candidate by next week.

President Higgins might not have it all his own way during the campaign but, as of now, his re-election looks almost a foregone conclusion. He has the backing of the two major parties, plus Labour, and has been a popular president.

The memory of Gallagher that many people have in the last election has been seared by “Tweetgate”. In the short term the infamous use of a false tweet on a crucial RTÉ pre-election debate put paid to any hopes he had of winning that race. Played out over the past seven years, history has been kinder to him. The false tweet had a big bearing but there was also his own naivety and verbal clumsiness when responding to the barbs of Martin McGuinness, or the questions over his business dealings.

In 2011, the President was ultimately the only one of the seven candidates who did not have to face anything like the same level of confrontational and (sometimes) hostile and intrusive questioning from the media.

Following the bruising battle seven years ago, there was some surprise that Gallagher was again standing. But despite the “hit” he took in the last few days of the came, he still finished second winning, almost 29 per cent of the vote (against almost 40 per cent for Higgins).

It is unlikely we will have the same ungainly ruck this time around. The election involves an incumbent president for the first time since 1965. Then, the outgoing president Eamon de Valera did not campaign on the grounds his office was above politics. It led to a sterile campaign, without debates or coverage on RTÉ.

That situation will not arise but neither will the free-for-all debates of seven years ago. Besides, Gallagher is wiser now and more experienced, and will be well prepared for such traps, as will the other candidates, which are likely to be Freeman, Duffy, and Sinn Féin’s Liadh Ní Riada. There is an outside chance a sixth candidate might sneak in through the council route or by securing the backing of 20 Independents in the Oireachtas. Councillors

The first thing that can be said of Gallagher is that he will be seen as a proxy Fianna Fáil candidate. If you look at the councillors who have supported him most are Fianna Fáil.

It is also interesting that, in the same, vein Duffy might be seen as proxy Fine Gael, mainly because the main Government party is not fielding a candidate of its own.

Gallagher’s message so far has been a positive one. He has been careful to praise President Higgins, portraying himself not as a replacement but a successor.

It is clear it is a generational thing. His vision is of a president in a changing Ireland, facing turbulent times, addressing marginalisation at home and abroad, appealing to a younger demographic domestically and among the diaspora.

The details of that have yet to be worked out, but it will have a resonance with some. Inherent, though not stated, is a reference to Higgins’s age and his undertaking to serve only a single term. That too should have some purchase with voters. Gallagher can certainly make an impact, but at this juncture it is hard to see any of the candidates winning the election.