Finlay angry at failure to help 138,000 children in poverty 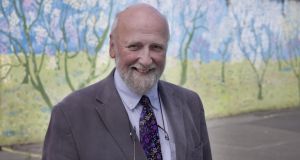 Ireland is no “Republic of opportunity” for tens of thousands of children trapped in poverty, the outgoing chief executive of children’s charity Barnardos has said.

Fergus Finlay, who retires shortly after 13 years at the helm of Barnardos, was speaking as the charity prepared to launch its annual report on Tuesday.

Mr Finlay said he is “angry” at the lack of progress to improve the position of an estimated 138,000 children living in poverty in Ireland but very proud of the work of 400 member team at Barnardos.

The annual report discloses that a record high figure of 15,300 children and families, up from 14,163 in 2016, sought help from Barnardos last year.

Mr Finaly called on the Minister for Finance Paschal Donohoe not to increase social welfare payments in the forthcoming Budget but instead to make it “child proof”.

He said that the reason for the failure to address the issue of child poverty is public policy neglect. “Ireland does not invest in services, especially ones such as early years.”. Funds should be directed to improving early years services, he told RTÉ’s Morning Ireland.

“For many years Ireland was the only country in the OECD that did not invest anything in early years,” he said.

While he had seen “many heart-breaking things” in his time with Barnardos, he was very proud of the “unwavering dedication” which has helped 86,585 children and families over the past decade,” Mr Finlay said.

“Children come to Barnardos for a myriad of reasons, but each and every one is met with care and compassion.”

The report disclosed Barnardos provided practical and emotional supports to children and parents in its 40 centres, in families’ own homes, through the school environment and within their communities.

Mr Finlay said he never would have believed, had he been told the day he began work with the charity, Ireland “would one day have thousands of children with no home”.

His work for Barnardos started in 2005 in the middle of a boom “that we all thought would never end. Even when it did, and years of recession followed, the number of homeless children was tiny”.

It was only when the economy began to grow again, and the future looked bright for many, that “suddenly there was no room for thousands of children”.

The problem is not just homelessness, he stressed. Thousands of children urgently need psychological support and are waiting for speech and language supports essential to their development.

“That’s part of the picture of 21st century Ireland – a Republic of Opportunity.”

While the future is bright and there are many more opportunities for many children, the situation is worse for children trapped in the cycle of poverty, he said.

A recent report from a Department of Finance strategic advisory group noted that a calculation some years back that 75,000 children would have to be lifted out of consistent poverty had been increased to 95,000.

Children have been failed by successive governments, by ideology and by society, he said.

There had been successful social campaigns on issues like water charges and same sex marriage but children do not seem to matter enough.

“This generation of Ireland has the chance to be the first to truly recognise that children have the right to security, to stability, to nourishment and shelter, and to the care, love and respect of someone who puts their needs first.”

The figures for child poverty are “frightening” and “every single statistic masks a child”.

The staff who work in Barnardos’ projects daily meet children whose eyes “reflect no hope”.

“They work alongside children who aren’t meeting their developmental milestones, children who don’t know how to control their emotions, and children who haven’t got the skills to make friends.

And they change all that. It starts with respect.”

“When you can combine world-class programmes,on the one hand, with real respect for children on the other, it does become possible, little by little, to change lives,” Mr Finlay said. “And to restore hope.”

Mr Finlay is being replaced as chief executive in October by Suzanne Connolly, the long serving director of children’s services with Barnardos.

“At Barnardos we work to improve the lives of children, to ensure their futures are as bright as possible, we believe every child deserves the same opportunities and possibilities,” she said. The charity’s mission was also to support parents “and challenge society where it fails our children”.

Asked about his plans post-retirement, Mr Finlay said he has no firm plans. He said he remains interested in running for President of Ireland but would not contest any presidential election against Michael D Higgins.