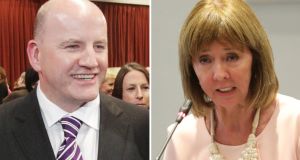 At least five candidates will contest the presidential election next month after two Independent contenders each won the backing of four councils, with a third Independent on the verge of securing a nomination.

Businessman Seán Gallagher and Senator Joan Freeman both reached the required four council endorsements yesterday during a dramatic day in which 13 local authorities debated or voted on presidential nominations.

Louth businessman Gavin Duffy also moved closer to the threshold, securing the backing of Carlow County Council and Wicklow County Council. As of last night he had three nominations and with a further endorsement expected from Louth County Council next Monday, his place on the ballot paper is almost assured when nominations close on September 26th.

President Michael D Higgins has already indicated he will seek re-election and Sinn Féin is expected to announce its candidate on September 16th. The front-runner is the Munster MEP Liadh Ní Riada, but yesterday it was disclosed that the North-West Cúige of the party has nominated the veteran Cavan-Monaghan TD Caoimhghín Ó Caoláin.

“We begin the election proper now,” he said last night talking about a changed Ireland and the prospect of turbulent times. “I want to outline my vision of the next seven years for Ireland. I do not wish to be Michael D Higgins’s replacement but want to be his successor.”

Ms Freeman secured three nominations yesterday from Galway County Council, Galway City Council and Fingal County Council, having secured the backing of Cork earlier. “What I am trying to do is say maybe we need to change our focus,” she said last night,” she said.

“President Michael D Higgins brought a dignity to this country and was perfect for the time that was in it. The President needs to reflect the people at that time and we are in a very different place and time now,” she added.

Speaking after receiving the nomination from Carlow County Council, Mr Duffy said he was halfway to the required four nominations (having also received the backing of Meath County Council).

“The job is to continue talking to councils trying to convince them and seal the next two to put me on the ballot paper for Áras 2019,” he said.

Separately, Fingal councillor Jimmy Guerin, the brother of Veronica Guerin, criticised independent presidential candidate Gemma O’Doherty over her allegations the State was involved in the murder of the investigative journalist.

He told a meeting of the council discussing presidential nominations that Ms O’Doherty’s allegations were hurtful, offensive and “disgusting”.