Minister for Health briefed on report about cervical screening controversy

August 1st, 2018: After meeting Leo Varadkar, Vicky Phelan says the Taoiseach promised her "he meant what he said” when he had announced that women caught up in the CervicalCheck controversy would not be forced to go to court for compensation. Video: Enda O’Dowd 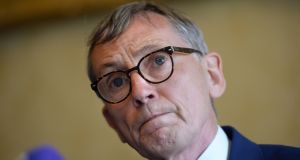 A commission of investigation into the CervicalCheck controversy, as promised by the Government, is not needed, according to the Scally report to be published this week.

Dr Gabriel Scally briefed Minister for Health Simon Harris on Monday ahead of the publication of his 200-page report on Wednesday.

Sources said Dr Scally, the public health doctor asked to investigate why women diagnosed with cervical cancer were not told about an audit revealing false negative smear tests, does not believe a commission of investigation is needed.

It is understood his report says there are other ways to deal with the issues involved.

Limerick woman Vicky Phelan, whose High Court settlement in April revealed the non-disclosure of incorrect smear tests to scores of other women, has said Taoiseach Leo Varadkar told her a public commission of investigation is the “preferred option”.

Mr Harris had said there would be a commission of investigation, to be set up this month. The establishment of such an inquiry will be a decision for the Government.

It is also understood Dr Scally will conclude that the labs who carry out the testing for the CervicalCheck screening programme can continue to be used.

The report is expected to be presented to Cabinet by Mr Harris on Wednesday. Two of the women affected by the CervicalCheck controversy, Ms Phelan and Lorraine Walsh, along with Stephen Teap, who learned about revised smears concerning his late wife Irene only earlier this year, will be briefed by Dr Scally at the same time as Mr Harris briefs the Cabinet.

Meanwhile, negotiations with the two laboratories carrying out the bulk of testing for the CervicalCheck screening programme are “at a critical stage,” the Health Service Executive has said.

The HSE said it has had “intensive negotiations” for a number of weeks with two labs, Quest Diagnostics in New Jersey and Medlab Pathology, which is based in Sandyford, south Dublin, about extending their long-running contracts beyond the current expiry date next month.

The labs have threatened to withdraw from the screening programme unless the State indemnifies them on false negative cases where smear tests initially showing no abnormalities are later found to be incorrect.

Under the current contracts, the labs indemnify the national screening service against any cases of false negatives and medical negligence that emerge in the course of their testing for the CervicalCheck programme.

The labs have reassessed the financial risk in light of the legal cases taken against them over the CervicalCheck controversy and want the State to underwrite them if they are to extend their contracts.