Pope’s visit not the end of church in Ireland, says archbishop

Many commentators missing what the church is, claims Diarmuid Martin 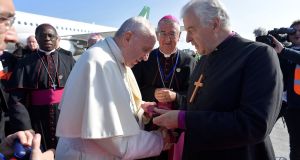 Those who saw the recent visit of Pope Francis as the end of the Catholic Church in Ireland had “really lost the understanding of what the church is,” Archbishop of Dublin Diarmuid Martin has said.

“The church is not just an institution of a cluster of social institutions. It is above all the place where we learn to know Jesus as the one who revealed to us who God is, a God of mercy and compassion,” he said. This was “a God who offers us forgiveness and new beginnings. In the church we experience hope and renewal,” he said.

Archbishop Martin was speaking at Mass in Lourdes where he is leading 2,000 people in the annual Dublin diocesan pilgrimage to the French town. It includes 177 sick people, 45 nurses and eight doctor volunteers as well as 300 young people assisting them. There are also pilgrims from 20 parishes and for the first time 133 teenage volunteers from 25 different secondary schools.

“We look towards the future of the church in Dublin and in Ireland. There were those who could only see in the visit of Pope Francis what they considered the end of the church as they saw it. The problem is that many of those commentators had really lost the understanding of what the church is,” Dr Martin said.

“I am not necessarily blaming them. Sadly, many have lost an understanding of the church because of the way we as church have lived and failed,” he continued.

“The church had too often become closed in on itself and became marked at times with what Pope Francis called ‘attitudes of aloofness and clericalism that at times in your history have given the real image of an authoritarian, harsh and autocratic church’.”

Referring to the visit of Pope Francis he said “the people of Dublin responded with generosity and enthusiasm”. He himself “will always remember the crowds that thronged the streets of Dublin as the pope journeyed across our city. I remember the faces of men, women and especially of families and their children at the various events.

“Looking back, we have every reason to be proud,” he said.

But now was the time “to begin to look forward. It is not just a time to remember what we have done so well, but to reflect with a sense of urgency on the future.

“Over the past few weeks, I reflected on what the future must be. My answer was simple: My hope is that Pope Francis will challenge the church in Ireland to be more authentically the church of Jesus Christ in a culture that is different,” he said.

The archbishop has already invited “every parish in the diocese of Dublin to find concrete ways of reflecting on this challenge, perhaps in the weeks around the Feast of St Laurence O’Toole, principal patron of the diocese, on the 14th November”.

This was “not a question of a political style consultation, but a call to each believer and faith community radically to interiorise what the challenge of faith in Jesus entails.

“Each parish and parish community can find its own path of reflection, with the help of the Parish Pastoral Council. The aim is not to provide instant answers but at least to begin to set out a realistic agenda for renewal of the church in the years to come,” he said.