Man recovering after being shot in suspected Coolock gangland attack 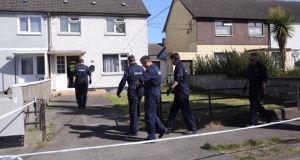 Gardaí at the scene of the shooting at Cromcastle Drive, Kilmore in Coolock. Photograph: Gareth Chaney/Collins

A man was recovering in hospital on Wednesday night after being shot in the legs in a suspected gangland attack in north Dublin.

The victim, who is in his early 30s, was ambushed outside a house in Coolock, north Dublin, at about 2pm on Wednesday by a gunman who fired several rounds, wounding him in the legs.

After the alarm was raised, gardaí and paramedics rushed to the scene on Cromcastle Drive, Kilmore, Dublin 5. The victim was treated at the scene by paramedics before being taken by ambulance to Beaumont Hospital, less than 1km away.

The area where the man was shot was sealed off for an examination by the Garda Technical Bureau while officers from Santry station conducted door-to-door inquiries.

Local people said some neighbourhood children were playing in the area when the attack occurred. They added that the shooting was the latest in a series of attacks in the locality.

“It’s a shock that they can come in here, shoot someone and then go and nobody seems to get caught,” said one woman close to the scene on Wednesday afternoon.

Twelve months ago Hamid Sanambar, a 42-year-old originally from Iran, was gunned down on Kilbarron Avenue, about 300m from Wednesday’s crime scene. At the time he was calling to the family home of Seán Little to pay his respects after the 22-year-old had been shot dead a week earlier in north Co Dublin.

The deaths of those two men were linked to a north Dublin feud that began in January, 2019, and has so far claimed the lives of five people.

However, gardaí said it was unclear if Wednesday’s gun attack was linked to that dispute as the man wounded in the latest incident has a long history of involvement in crime. He has extensive contacts in the Darndale area, about 2km from where he was shot, and gardaí have not ruled out the possibility he was shot as part of a local feud between criminals in Darndale, where a teenager was shot last Friday, and Coolock.

Gardaí believe Wednesday’s shooting was well planned and that those who carried it out likely had their victim under surveillance for some time.

The victim is from the Cromcastle estate where he was shot and though gardaí said he was lucky to survive, his injuries were not life-threatening and he was expected to make a full recovery.

He has been involved in serious crime for about 15 years and as a teenager was convicted of a gun crime in which a man was wounded and almost died. He served a seven-year sentence.

He also has convictions for driving offences, public order crimes, car theft and a range of anti-social behaviour crimes. By his early 20s he had amassed more than 70 convictions.

Aodhán Ó Ríordáin TD (Lab) said the shooting is worrying, especially as it comes just one week after a teenager had been shot and wounded in Darndale.

“Children in pockets of my constituency are growing up thinking that this kind of criminality is normal when it is absolutely not,” he said. “We need to see a real response now to this in the form of a north-side crime task force, similar to the Mulvey Commission for the north-inner city. We also need additional Garda resources deployed urgently as a deterrent.”

Gardaí said while no arrests had yet been made in connection with the shooting, a full investigation was being carried out by officers at Santry station.