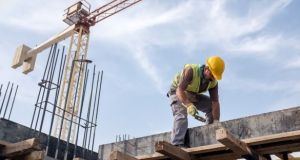 Simon Harris warned that construction workers should not travel to sites unless they could do so safely. Photograph: iStock

The first moves to ease a two-month lockdown designed to curb the spread of Covid-19 take effect today, amid fears construction could become the next flashpoint in the battle against the disease.

Concern among health officials centres on possible challenges in practising social distancing in travel to and from construction sites, as well as in shared staff accommodation. These were factors behind the rapid spread of the disease in nursing homes and meat factories.

Minister for Health Simon Harris warned last night construction workers should not travel to sites unless they could do so safely.

Describing today as a “big moment” for the country, Mr Harris said he was pleased the public’s collective effort had made it possible but was nervous at the increased risk involved as people move around more.

“We all need to approach the coming days with care and caution, and to show some collective cop-on. We want the shops to stay open, so there’s no need to rush down to your local DIY centre or garden shop today.”

There was good news on Sunday with the lowest number of new cases reported for two months. Just 64 new confirmed cases of Covid-19 were notified, the lowest daily figure since March 16th.

The drop in new cases will feed into a further lifting of pressure on hospitals and their intensive care units over the coming weeks.

Regulations requiring travellers coming into Ireland to complete a passenger locator form are expected to come in to effect this week. The Department of Health is also taking legal advice on whether a legal requirement on travellers to self-isolate for two weeks is necessary.

Automatic testing for all contacts of confirmed cases is being introduced today, and the HSE aims to have 90 per cent of tests completed within three days.

From today, garden centres, farmers’ markets and other outdoor retail settings can reopen, along with opticians, motor and bicycle repair shops and phone repair shops.

Outdoor construction will resume and allotments will reopen. Up to four people who don’t live together can meet outdoors while keeping at least 2m apart.

Play dates for children can go ahead “so long as they’re outdoors and social distancing can be adhered to”, the Minister clarified.

However, the 5km travel limit remains and the public is still being advised to stay at home except in limited circumstances, such as for shopping, exercise or for medical reasons.

The country is facing into a very important week as restrictions are eased, HSE chief executive Paul Reid said. He urged people to keep doing what they have been doing to restrict the spread of Covid-19.

The worst thing would be if we “go backward” and the rates of positive tests increased again, he told a briefing on Sunday.

“We’re in a much better place now, but if we were restoring services with rising positivity that would give me concern from the public’s perspective and that of healthcare workers.”

It could take at least three weeks after a resurgence of the virus before measures could properly be put in place to combat it, HSE chief clinical officer Dr Colm Henry warned.

If compliance with restrictions were to “disappear”, the reproduction number – which measures how many people a case goes on to infect – could go up very rapidly, he said. This would not be known for seven to 14 days during the incubation period of the virus and then it would take another seven to 14 days for any reintroduced measures to take effect.

Among the community services that are targeted to restart within weeks are the schools vaccination programme, supported discharges for patients going home from hospital, home supports for older people and those with disabilities and day services for these groups.

Chief medical officer Dr Tony Holohan, Mr Reid and Department of Health director general Jim Breslin are due to appear before the newly formed Dáil committee on Covid-19 on Tuesday.

Concerns have been raised over whether the six-hour, three-session meeting, due to take place in the Dáil chamber, accords with social-distancing requirements.

The wearing of face coverings in indoor settings where social distancing cannot be practised is officially advised from today.

Officials said face masks needed to be prioritised for healthcare workers. One million face masks a day are now being used in in the health service.