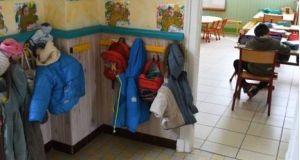 Sharing of desks, books, devices and other materials should be minimised, while there should be rules around the use of staff rooms. File photograph: Getty

Parents should be required to agree a “general contract” when schools reopen in which they accept new terms and conditions that balance the safety of the school with their child’s right to an education.

That is the recommendation of the Irish Primary Principals’ Network (IPPN) in a submission to the Department of Education over plans to reopen schools in September.

The document says pupils may end up having to physically attend school on a limited basis, such as every other day or every other week, and learn remotely on the remaining days. An extended week is also mooted as a possibility.

Much will depend on what guidelines are issued in relation to social distancing and how many pupils will be permitted in a classroom.

It says some principals have estimated that about one third of a class would fit in a standard classroom if a two-metre distance is required between desks. This could require pupils attending school on every third day, it notes.

The IPPN document says proposals to have half-days for pupils, where some would attend school in the morning and the remainder in the afternoon, are “not considered feasible for any size of school”.

This, it says, is due to the need to deep clean classrooms and stagger drop-off and collection times.

Children from the same family should be allowed to attend school on the same day, where possible, to make it easier for parents.

It flags that there will also be potential childcare issues for teaching staff and others if school days are staggered.

In terms of managing social distancing in schools, it suggests playgrounds or yards could be segregated into zones with, for example, six pupils playing together each day in each zone.

Sharing of desks, books, devices and other materials should be minimised, while there should be rules around the use of staff rooms.

It also expresses significant concerns about the ability of schools to fully implement guidelines to protect the school community and that there will be no way of fully eliminating risk.

In light of this, there should be a standard approach to deal with parents or children who break social distancing rules or who refuse to accept the “general contract”.

Schools will also face a major financial challenge and require additional funding up-front for hygiene measures to enable them to operate safely.

In addition, it says the centralised procurement and distribution to all schools of sufficient PPE (personal protection equipment) and materials prior to their full reopening in the autumn.

One principal, it says, estimated it would cost a school about euro3,000 per month for cleaning, hand sanitisers and gloves, after reviewing costs with suppliers.

In addition, it said many schools reply on income from the rental of halls which subsidises essential school maintenance in many cases. This, it says, should be taken into account when funding schools.

The IPPN document also calls on the department to ensure that schools have greater flexibility in how they allocate staff, including special education teachers, to comply with social distancing requirements.

It says all staff must be provided with training prior to reopening so everyone has the same information at the same time.

It adds that no school should lose a staff member owing to a decision by a parent to keep their child at home in light of the Covid-19 risk.

In addition, it says no new initiatives should be introduced in primary schools in the 2020/21 school year to ease the pressure on school staff who must prioritise getting their schools up and running in very changed circumstances. Inspections should also be paused until at least January 2021.

The role of inspectors should be temporarily changed to support schools to get back up and running and to restore normality.