Reopening of McDonald’s brings joy and traffic jams to Dublin

‘When I heard it was open, I said, ‘why not?’ The lockdown has been ‘tough on the kids’ 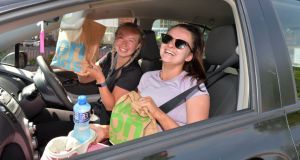 Kelly Leahy and Aimee Bennett from Crumlin were among the first to secure their order when McDonald’s reopened its drive thru on the Kylemore Road on Wednesday. Photograph: Alan Betson/The Irish Times

Thirty years ago McDonald’s opened its first restaurant in the Soviet Union. Thousands turned up to the grand opening in Moscow’s Pushkinskaya Square and the crowds kept coming for weeks afterwards.

For many observers at the time, it symbolised the end of the Cold War and the embrace of capitalist values in the communist East.

The reopening of six McDonald’s drive-thrus in Dublin hardly represents an epoch moment in world history, but for those queuing for the return of the Big Mac it meant a glimpse of normality after months of lockdown.

McDonald’s tried to keep the openings low-key, but when word got out that a few restaurants were reopening at 11am, albeit on a very limited basis, the cars started to descend on the Dublin restaurants involved - Nutgrove, East Wall, Artane, Malahide, Kylemore Road and Tallaght.

Staff wore face masks and there were perspex screens at the drive thru windows - though a drive thru was a form of social distancing before the concept was created.

Some might sniff that McDonald’s is a symbol of our calorific and consumerist lifestyle, but who cares when you have been cooped up at home for weeks on end?

Cars that turned up early to the McDonald’s in Kylemore Road, Dublin were turned away as the car park was not open. A few parked on the verges outside. As soon as the bollards went down, the cars streamed in.

Within a few minutes they were backed up on the Kylemore Road right up and around the corner to the very busy Naas Road which is one of the main approach roads into Dublin. At one stage gardaí arrived to sort out the congestion.

Many queued in overheated cars for a half-an-hour for a menu that was limited by necessity as not all McDonald’s staff have returned to work yet.

Most of the early-birds were mothers with their children. Deprived of the rhythms of school, the promise of a McDonald’s is no longer the mundane treat it used to be.

At the front of the queue Danielle Gannon brought her children Holly (9) and Aidan (9) to get happy meals.

“Everything has been taken from them. When I heard it was open, I said, ‘why not?’ They can’t go to playgrounds. It’s been tough on the kids. They weren’t missing school at the start - it was a novelty, but now they are dying to get back to normal and so am I.”

Elaine Smith turned up with her daughter Kelly (20). Elaine just wanted to get the McDonald’s coffee “that’s my normal school run and I miss it” while Kelly was getting chicken nuggets and chips.

Sinead Fleet and her son Scott (9) came down after a visit to Crumlin children’s hospital where he was getting a procedure done. Her son, who has Down Syndrome, beamed as he clutched the familiar brown bag with its yellow arches.

“He heard about the chips. It’s his favourite things. It’s great to have some bit of normality back for him. That’s the first bit of normality for him. It’s been very tough without any services or schooling,” she said.

McDonald’s intends to open the rest of its drive thrus in Ireland in early June.