Seven more Covid-19 deaths were reported in in the North, bringing the total to 489 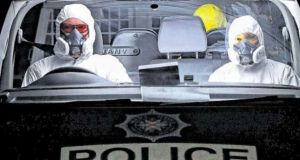 Contact tracing has resumed in Northern Ireland and is being carried out on a cross-border basis, the North’s health minister has confirmed.

Speaking at the Northern Executive’s daily coronavirus briefing on Tuesday, Robin Swann said the service to trace the contacts of all individuals who had been diagnosed with coronavirus had been operational since Monday, when 36 confirmed cases were added to the programme and 35 cases followed up.

He told The Irish Times that contact tracing was being carried out exclusively by telephone and in a similar manner to the method used at beginning of the pandemic.

“Our very first case was an individual who landed in Dublin Airport then travelled to Northern Ireland back to their home and we saw the Public Health Agency (PHA) and the Health Service Executive (HSE) actually working together to do that contact tracing, so we’re taking that approach to begin with,” he said.

Mr Swann was speaking after his department reported seven more people had died in Northern Ireland from Covid-19, taking the total death toll to 489.

The department also reported that 20 more people tested positive for coronavirus bringing the total number of confirmed cases in Northern Ireland to 4,421.

So far 40,580 people have been tested for the virus in the North.

The department’s figures relate to hospital deaths. It is estimated that when care and residential home deaths are taken into account that the overall figures will increase by at least one-third.

Mr Swann said he had spoken to his counterpart in the Republic, Simon Harris, on Tuesday morning regarding the development of a contact tracing app and he was also monitoring progress on digital technology within the NHS.

He had previously said that his preference would be for a single app which would work across the British Isles, but if different apps were used they would be compatible.

Contact tracing was suspended in Northern Ireland in mid-March. A pilot programme resumed on April 27th. Mr Swann said he expected the contact tracing service to be in place “for the next year at a minimum”.

On Tuesday evening, a virtual meeting to discuss the ongoing response to coronavirus on both sides of the Border took place between the Tánaiste, Simon Coveney, the North’s Secretary of State, Brandon Lewis, and the North’s first and deputy first ministers and the respective health ministers.

In a joint statement, Mr Coveney and Mr Lewis said they discussed the respective plans for emerging from lockdown “given the importance of implementing consistent approaches wherever possible and strong collaborative arrangements”.

“Strong data-sharing arrangements North/South”, they said, would be a necessary part of the easing of restrictions.

The hospitality, tourism and leisure sector along with retail businesses, apart from certain supermarkets and off-licences, will benefit from the rates relief which will operate until March 31st next year.

The scheme also will apply to the childcare sector and to Belfast City, Belfast International and City of Derry airports.

Mr Murphy said the rates support packages would also see all businesses receive a one-month extension of the current three-month rates holiday up to July 31st this year.

“This rates package, which is aligned with the Executive’s pathway to recovery, brings the total support for businesses from rates relief and grants to almost £700 million,” he said.

Mr Murphy told the Northern Assembly on Tuesday that large food stores and off licences were not part of the scheme as they had been able to continue trading, although with higher costs.