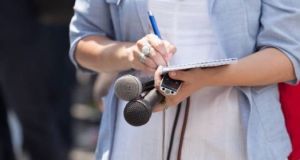 Irish News editor Noel Doran said the support for journalists “sends out a strong message that all the attempts at intimidation will have no effect on our coverage”. File photograph: Getty

A wide range of political and civic society has come out in condemning recent threats against journalists in Northern Ireland.

In April, dissident republicans threatened an Irish News journalist while earlier this month all journalists in the Belfast-based Sunday World and Sunday Life were threatened by Ulster Defence Association members in southeast Antrim due to their coverage of their alleged criminal activities.

The latest politician to be threatened is DUP East Antrim MLA David Hilditch.

On Wednesday, three daily Belfast-based papers, the Irish News, the Belfast Telegraph and the News Letter are to publish statements standing up for journalists and for press freedom and asserting the right of reporters “to work without threats, intimidation or harassment”.

Their statements are supported by First Minister Arlene Foster and Deputy First Minister Michelle O’Neill, by Northern Ireland MPs and MLAs, by the National Union of Journalists, by church leaders, trade unionists and business leaders, artists and human rights groups.

Signatories to the statement also include Northern Secretary Brandon Lewis, Oliver Dowden, the UK’s secretary of state for digital, culture, media and sport, the World Association of News Publishers, the International Federation of Journalists and the International Trade Union Confederation.

Séamus Dooley, the NUJ’s assistant general secretary, said members welcomed the “strong stand taken by political and community leaders and look forward to a renewed drive to ensure journalists can safely carry out their work on behalf of the public”.

He said the support for journalists “sends out a strong message that all the attempts at intimidation will have no effect on our coverage, that the perpetrators need to be robustly pursued by the authorities and that civil society is firmly behind freedom of the press”.

Sunday Life editor Martin Breen said everyone must “stand up against these vile threats, as their sole aim is to silence investigative journalism and curtail the public’s right to know about those gangsters operating in their communities across Northern Ireland”.

Sunday World editor Brian Farrell said the threats highlighted “the risk and importance of exposing the criminal menace that plagues our society”.