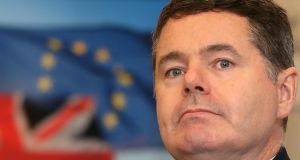 Minister for Finance Paschal Donohoe has told the Dáil he is examining the case of women on maternity leave who are not able to access the temporary wage income support scheme.

Responding to Fianna Fáil finance spokesman Michael McGrath, who asked if a change in legislation was required, the Minister said the intent of the emergency legislation was to treat all employees equally.

The Minister also said the banks “are now moving into a position of considerable losses”.

Speaking during a debate on the coronavirus crisis, Mr Donohoe said the Department of Finance and Revenue Commissioners were looking at the issue to find a way to change the rules around the subsidy to allow women returning from maternity leave to become eligible for the scheme.

He said it was always intended that the payment would treat all citizens equally.

There were sharp exchanges with Sinn Féin’s David Cullinane, who accused the Minister of giving a glib response when he raised the same issue.

Mr Donohoe said “I won’t allow any allegation to be developed around this issue” that he would not treat people fairly.

The Minister told Mr Cullinane they would know by the weekend how many people were no longer receiving the pandemic payment with the beginning of the reopening of the economy.

He said that if the payment was continued until the end of the year, then citizens on the dole before the Covid-19 crisis would be asking why they were receiving less than those receiving the pandemic payment.

Outlining the current situation, the Minister said “we expect national income to fall by 10.5 per cent this year”.

“We now have just under 590,000 recipients of the pandemic unemployment payment, along with the 215,000 individuals on the live register – it now means that we have one and a quarter million of our citizens who are now in receipt of income support from the State.”

He said that “in the longer term, this is neither sustainable, nor is it affordable”.

As a result of this change in employment it was beginning to have a “sharp effect” on finances. He said the support to the economy from the State stood at over €13 billion.

He said that 1.25 million people are now in receipt of income support and “in the longer term this is no longer sustainable”.

Mr Donohoe also warned of the Brexit challenge facing Ireland. “The current transition will end on the 31st of December this year unless the decision is taken shortly to extend.”

He said that if a trade agreement was not in place there would be “very significant implications for our economy, and for our public finances”.

The Minster said although the Government was preparing for reopening the economy it had to look to the difficulties faced by Brexit.

But Mr Donohoe said he was confident that “we can rebuild our economy, that we can get our citizens back to work. And that we can yet again build an economy that’s capable of meeting the needs and aspirations of all.”