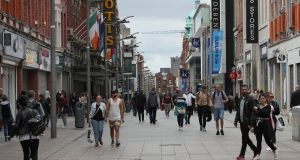 The Opposition will seek to press Ministers to guarantee there will be no cuts to the current Covid-19 unemployment payment before the crucial Dáil vote on spending takes place. Photograph: Nick Bradshaw

The Government will seek to have the Dáil rush through authorisation for billions of euro in additional funding for social welfare payments next week amid concerns that the Department of Social Protection will effectively run out of money in early June.

The move has been made more complex as the Opposition will seek to press Ministers to guarantee there will be no cuts to the current €350 weekly Covid-19 unemployment payment before the crucial vote on spending takes place.

In a letter to the Dáil’s business committee, Minister for Finance Paschal Donohoe said the department’s current budget of €8.6 billion is likely to be 90 per cent spent by the end of May and fully spent by early June. The Dáil was due to vote on department budgets for 2020 at the start of the year but because a general election was called, the vote was never held. The Government is currently spending money under a rule which allows it to use four-fifths of the previous year’s budget while it waits for Dáil approval.

The issue is expected to be considered by Cabinet later this week and then by the Dáil for a potential vote next week.

A Government source suggested the current pandemic schemes may continue on a no-policy-change basis, with potential changes left until the next government.

Labour TD Ged Nash said his party would be seeking assurances next week that the existing €350 payment, currently claimed by 585,000 people, would remain in place.

It comes as a new Dáil Covid-19 committee was told the cost of building complex projects such as the national children’s hospital could increase by up to 40 per cent as a result of new safety measures being introduced on construction sites.

Cost increases of such a scale could add hundreds of millions of euro to the current estimates for the new hospital, which are about €1.7 billion.

Director general of the Construction Industry Federation Tom Parlon also said the new safety arrangements would add up to €15,000 to the cost of building a house. And the cost of an apartment could rise by €20,000.

Meanwhile, the number of known cases of Covid-19 increased by 51 to 24,251, with health workers accounting for 31.5 per cent, according to latest figures from the National Public Health Emergency Team (NPHET). This is the fourth day in a row the number of new cases has been less than 100.

However, a sharp increase in cases related to outbreaks in meat-processing plants, by more than 300 to 828 in the last week, was described as “concerning” by Dr Ronan Glynn, the State’s deputy chief medical officer. He said the development would be discussed at a meeting of the team on Friday.

Separately, in a statement on Tuesday night, the Health Service Executive said it had “suspended the practice” of informing employers of employees’ Covid-19 test results, “while we seek guidance from the Data Protection Commissioner”. The statement came following criticism that test results had been given directly to managers of meat plants with outbreaks before workers were told.