Coronavirus: Death toll rises to 1,571 in Republic after 11 more fatalities 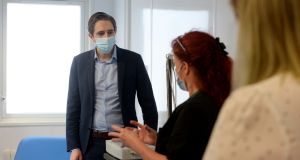 Minister for Health Simon Harris, pictured earlier this month, has ruled out sixth-class primary school returning to the classroom before going on to second level. Photograph: Alan Betson / The Irish Times

Another 11 patients have died from Covid-19, the National Public Health Emergency Team (NPHET) has reported. There have now been a total of 1,571 Covid-19 related deaths in the Republic.

A total of 64 new laboratory confirmed cases of the disease was reported by the team at its daily briefing on Wednesday evening, bringing the total number of cases to 24,315.

In Northern Ireland, a further five deaths from Covid-19 were reported on Wednesday bringing the death toll in the North to 494.

The North’s Department of Health also reported that 18 more people had tested positive for coronavirus, bringing the number of confirmed cases to 4,439.

As the Government plans for the next stage of the easing of the lockdown, parents’ representatives have called for primary schools to be partially reopened in mid-June if it is safe to do so.

Áine Lynch, chief executive of the National Parents’ Council Primary, said the decision to keep schools closed until September was made at a time when public health conditions were worse than they are now.

Some parents have requested that older children be allowed return to school to aid their transition to second level and also because they could understand physical distancing.

However, Minister for Health Simon Harris has ruled out sixth-class primary school returning to the classroom before going on to second level.

“The short answer is no,” said Mr Harris via social media.

Addressing financial concerns in the Dáil, Minister for Finance Paschal Donohoe said the Government would not keep unviable companies on life support.

Speaking during a debate on the impact of the coronavirus pandemic on the Irish economy, he said the economic recovery would be gradual and that the Government would tailor supports for companies, including those in the hospitality sector where activity was likely to be below capacity for some time to come.

Although the supports would be targeted and tailored, the Government “will not keep unviable firms on life support”, the Minister said.

The Irish economy may end up with a budget deficit of around €30 billion this year due to the impact of the pandemic, Mr Donohoe said.

“We expect public debt to increase significantly this year,” Mr Donohoe said, adding that 1.25 million people were now in receipt of income support from the State.

He said that, to date, the cost of this State support was €13 billion and that this was increasing at a rate of several hundred million per week.

Responding to questions in the Dáil, Mr Donohoe said if the Covid-19 payment was continued until the end of the year, then those on the dole before the crisis would be asking why they were receiving less than those receiving the pandemic payment.

However, speaking on Newstalk’s Pat Kenny show, Mr Donohoe rejected claims that the Department of Social Protection would soon run out of money to make the pandemic support payments.

“The department will have the funding they need to meet their commitments we have with our citizens.

“I would be very hopeful that we will be able to gain co-operation in the Oireachtas in order to see those estimates passed,” he said.

Mr Donohoe said he would work with all political parties to see the supports extended in line with the roadmap for reopening the economy.