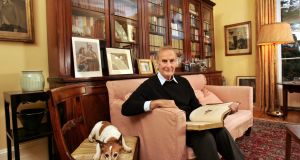 John Mulcahy at home in Ranelagh with his dog Bonnie in 2009. Photograph: Matt Kavanagh/The Irish Times 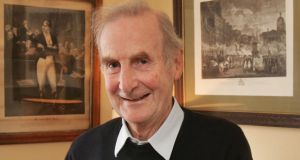 John Mulcahy, one of Ireland’s leading publishers for almost five decades and the owner of magazines including the Phoenix and the Irish Arts Review, has died in Dublin. He was 86.

Mr Mulcahy also sat on the board of the National Gallery of Ireland and was an accomplished author. He had been ill for more than a year and his last edition of the quarterly Arts Review was published this week.

He was born in 1932 in Perth, Australia but grew up in Ireland after being brought to the State at the age of three following the death of his father, who was just 33-years-old.

His family settled in Ballinakill, Co Laois and he was sent to Clongowes Wood College in Co Kildare before going on to study economics and history at Trinity College, Dublin.

After he graduated from university, Mr Mulcahy travelled to Canada where he worked first for an investment management company and then as a columnist for the Montreal Financial Times.

He married Nuala O’Farrell in New York in 1957 and the couple returned to Ireland in the 1960s.

He acquired Hibernia Magazine in 1968 which ultimately morphed into the Sunday Tribune in 1981, although he was not involved in the newspaper’s short-lived first iteration for long.

Instead, he turned his attention to the satirical Phoenix which he launched in 1983. Mr Mulcahy was the as owner and editor of the magazine for many years and was also the voice of ‘Goldhawk’ on radio ads broadcast for decades.

In the early 1990s, Mr Mulcahy founded a magazine in London called the Digger.

In 2002, he added the Irish Arts Review to his portfolio and six years later was appointed to the board of the National Gallery.

Mr Mulcahy is survived by wife Nuala and seven children, Nick, Michael, Stephen, Brigid, Jack, Hugh and Aengus. He was predeceased by his daughter Natasha.