Give HPV vaccine to boys too, says Irish Cancer Society 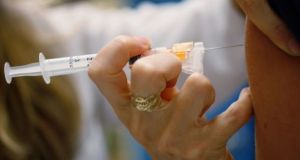 No treatment exists for the HPV infection, so the focus must be on preventing those at risk from acquiring the virus. Photograph: Photograph: Joe Raedle/Getty Images

A potentially life-saving vaccination already given free to girls should also be offered to boys, the Irish Cancer Society has said.

Two out of every three teenage girls in Ireland avail of a publicly-funded HPV vaccine, which protects them against developing cervical cancer when older.

However, as a study earlier this week found, most people are not aware that men are also at risk.

HPV (Human Papilloma Virus) is a very common virus passed on during sex — 90 per cent of adults will be infected at some stage in their lives — but certain strains can lead to cancer.

Up to 100 women and 30 men die from cancers caused by HPV in Ireland every year.

In men, the virus is linked to cancers of the anus, throat, head, neck and penis.

In a number of countries the HPV vaccine is offered to boys as well as girls, including Austria, Australia, Canada, New Zealand and the US.

Averil Power, chief executive of the Irish Cancer Society, has called on the Government to introduce “gender-neutral vaccination”, and to commit €10.4 million in the upcoming budget for extending it to boys over the next five years.

“We believe that such a relatively low cost will have significant benefits long into the future for our children, who will be protected against a number of cancers, and the health system which, with fewer cancers, will see a significant reduction in treatment costs,” she said.

Ms Power also urged a “comprehensive education” programme for those administering the vaccine so they are fully informed and in a position to provide parents with “accurate information and research”.

“This will help to create awareness and assure and educate parents and their sons about the importance of the vaccination, to encourage strong uptake rates,” she said.

Uptake of the HPV vaccine, which trades under the brand name Gardasil, started rising again among girls for the first time last year after controversy erupted over alleged side-effects.

Uptake had dropped from 87 per cent nationally — the world’s most successful HPV vaccination programme at the time — to just 50 per cent in 2016.

Campaign group Regret (Reactions and Effects of Gardasil resulting in Extreme Trauma) had claimed to represent more than 350 young Irish women who developed long-term side effects after receiving the vaccine.

There are no studies to support claims the vaccine is responsible for chronic side-effects.

It is recommended by the World Health Organisation, the International Federation of Obstetricians and Gynaecologists and the National Immunisation Advisory Committee.

Earlier this year, the State health watchdog, the Health Information and Quality Authority (Hiqa), started a public consultation on extending the vaccine free of charge to boys.

It found the vaccine was both safe and effective, and that immunising both boys and girls would have “considerable health benefits”.

No treatment exists for the HPV infection, so the focus must be on preventing those at risk from acquiring the virus, Hiqa said at the time.

The watchdog is preparing final recommendations for Minister for Health Simon Harris and the HSE.