Banish the light and take back the night 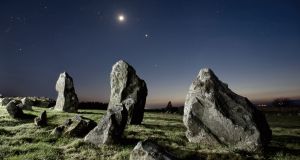 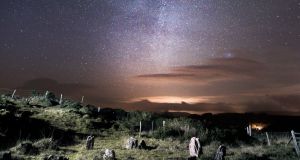 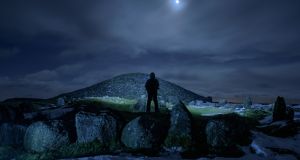 Less than 100 years ago, dark skies dominated Ireland. For millennia, the stars guided farmers and helped form our earliest mythologies, while the cyclical movement of the sun inspired the building of major monuments such as Newgrange.

Today, light pollution increasingly obscures our view of the stars: studies have shown that there has been an increase of more than 20 per cent in artificial light levels in Ireland over the past 25 years. Scientists say that this is negatively impacting on our health, with sleep disruption and – perhaps less quantifiable – a loss of our sense of place in the universe taking a toll. We now see no more than 300 stars, compared with an estimated 5,000-6,000 in pristine dark-sky regions.

“Megalithic monuments were built with a particular purpose in mind,” says Frank Prendergast, former head of the spatial sciences department at the Dublin Institute of Technology. “There was a reason why, for instance, the Boyne Valley passage tombs were constructed, with considerable difficulty, on higher ground, and why they have particular solar alignments.”

Prendergast will be a speaker at Pathways to the Cosmos, a one-day conference at Dublin Castle on Saturday, September 15th. Organised by Archaeology Ireland on behalf of the National Monuments Service and the Office of Public Works, it will focus on the alignment of megalithic tombs in Ireland and Atlantic Europe, what the dark sky meant to our ancestors, and why an unobstructed view of the stars is important for communities and tourism today.

One of the speakers, Fabio Silva, will show how one particular passage tomb in Portugal was aligned according to the seasonal appearance of Aldebaran, an orange giant star located about 65 years from Earth, and how this star’s appearance indicated it was time to move animals to higher pastures. Closer to home, Prendergast speculates that the appearance of the Pleiades constellation was the trigger for certain post-harvest activities.

Today, we appear to be losing a resource our ancestors recognised as very precious. Associate professor of astrophysics at Trinity College Dublin Brian Espey is compiling results from a national survey on night-time light in Ireland. “We use excessive amounts of it,” he says. “People are becoming aware of its effect on their sleep and on wildlife – not to mention the environmental impact of using so much more electricity than we need.”

Dunsink Observatory, near Castleknock in Dublin, remains a popular tourist attraction but Espey points out that it is no longer used for professional observing due to light pollution from the city. “We wouldn’t build a multistorey carpark next to Newgrange but we don’t always consider how light from nearby cities could impact on the site.

“We understand that the light from screens disturbs our sleep, but there is also a correlation between night light and sleep disruption, while a recent study [from the University of Exeter and the Barcelona Institute for Global Health] suggests a possible link between heavily lit streets and cancer.”

In early results from Espey’s survey, about half of 700 respondents in Ireland said they had been negatively impacted by artificial brightness, both in their own home and outside. But is it too late to turn off the lights?

“We can decrease overall luminesce,” says Espey. “Project 2020 commits to trimming and dimming night lights. Commercial and retail light has an impact. We can also look at different levels of light at night: is it really necessary to have residential areas brightly lit at 4am? I appreciate there are concerns about public safety but what we need is better, not more intense, lighting.”

The night sky is a great way of getting children interested in science, technology, engineering and maths (STEM) but we’re in danger of losing this invaluable resource, Espey warns.

“There are many reasons to tackle light pollution, including tourism at sites like Newgrange and dark sky astronomical events. You can be in the Céide Fields sitting in the huts and getting lost in the night sky; it is the best way to get an intimate connection with our history and our culture. The skies are always there and they are accessible to all, but I fear they will be gone and it will be too late.”

He adds: “Turning down the lights will improve our health, aid wildlife, reduce energy usage, boost tourism and save something very precious.”

Maynooth University PhD student Michael Cleary Gaffney is carrying out a survey on the effects of light-at-night on human health. To participate, go to goo.gl/dGNwzv

Stargazing around the world

Cities are usually visible from afar: just follow the bright orange orb that radiates into space. Since 2001, the International Dark-Sky Association has established more than 100 dark sky places worldwide, although many places fall outside this designation.

Some of the world’s best places to view the night sky include:

The Atacama desert, Chile: Tourism is the main industry in the small desert town of San Pedro de Atacama in northern Chile. The biggest draw is the night sky and the clear views of the Milky Way, which can be clearly seen even within the town. It’s not just the lack of light pollution spilling in from surrounding areas: the world’s driest desert is situated well above sea-level and clouds are exceptionally rare. Dozens of companies offer star-gazing tours. They’re worthwhile, especially for the views from the telescopes, but this journalist found that taking a bike to the edge of town any given evening also offered a spectacular light show.

The Arabian peninsula: Most of Saudi Arabia is empty desert and, as the Empty Quarter is free of humans, it’s also free of artificial light and offers excellent stargazing opportunities. Standing by the Wabar volcanic crater (250m deep and 2km in diameter) while staring up at the Milky Way was a particularly humbling experience.

Ireland’s dark sky reserves: No need to take a plane. The International Dark- Sky Association has designated 700sq km of Kerry as a dark sky reserve, taking in an area from Cahersiveen to Valentia Island (see KerryDarkSky.com for details). In Mayo, the International Dark-Sky Park runs from the Nephin Mountains to the Atlantic; the Mayo Dark-Sky Festival will run from November 2nd-4th and includes workshops, talks, walks and stargazing – MayoDarkSkyFestival.ie