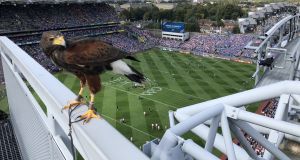 It’s a bird, not a plane that you might spot in the sky during a match at Croke Park.

Years ago, there might have been many more, but thanks to falconry you’ll now see a lot less of them.

Hawks were first flown over the crowds at Croke Park about three years ago to deter pigeons and seagulls from the pitch.

According to Barry Nolan, director of the Wildlife Management Services who provides the falconry service, the immediate aftermath of a match is an avian feeding ground. Birds can take their meal-to-go after scavenging empty seats, carrying food packaging outside of the stadium.

“We fly the hawks because they intimate natural predators,” Nolan says. “The gulls won’t land if they see a potential threat.”

Harris’s hawks are the particular breed used for the task, a species not naturally found in Ireland. They usually come to the Wildlife Management Services as 17-week-old chicks, and the handlers gain their trust. After their feeding routine is well-established, they are flown with a 30 metre string attached for three weeks before they fly free.

The hawks themselves are flown before, during, and after events, and sometimes, even they need reinforcements. “Gulls are very intelligent. You also use other things like lasers, bird scaring kites, acoustic systems make the sound of an injured bird or wild raptor,” Nolan says. “We’ve got lots of tools in the box.”