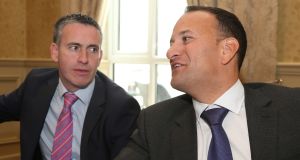 Minister of State at the Department of Housing, Planning and Local Government Damien English and Taoiseach Leo Varadkar, during the Fine Gael think-in in Galway. Photograph: Joe O’Shaughnessy

Taoiseach Leo Varadkar has denied accusations that the Government’s criticism of the pace of building by local authorities is an attempt to pass the blame for the housing crisis.

Minister for Housing Eoghan Murphy on Thursday threatened to use “emergency powers” under the Housing Acts to strip certain local authorities of their powers to provide emergency accommodation and transfer the responsibility to his department.

Mr Murphy issued the warning at the Fine Gael parliamentary party’s think-in in Galway on Thursday, as the political pressure on the Government over the housing crisis increased.

On Friday Mr Vardakar said there was no “quick fix” to the housing crisis and the Government was “not giving up” on addressing the huge demand for social and affordable housing.

Mr Varadkar said local authorities as well as the Government had a role to play but rejected accusations the Coalition was trying to pass the blame.

Mr Murphy and the Government are under severe political pressure due to their inability to make significant inroads into the numbers of people homeless, not least as they have been unable to stem the flow of new families into homeless.

Sinn Féin has tabled a motion of no confidence in the Minister that is unlikely to succeed as Fianna Fáil has said it will not support it.

The latest homelessness figures, published by the Department of Housing at the end of August, showed there were 9,891 people in emergency accommodation during the week of July 23rd to 29th, including 6,024 adults and 3,867 children.

The mideast - counties Kildare, Meath and Wicklow - has experienced a 98 per cent increase in child homelessness, from 65 to 129.

“If they don’t, I will have recourse to emergency powers within my department to step in and take control of some of those functions,” he said.

“I totally accept that this is not happening quick enough. That is why we want to put the pressure on local authorities to deliver faster of the money that’s already pre-allocated in the budget for next year.

“There is an additional €400 million for the Department of Housing.”

Mr Varadkar said he did not believe the Government had failed to meet its targets to get thousands of families and people out of emergency accommodation.

“To say you have failed is giving up. We are not giving up.”

Mr Varadkar said there was a need to reach the target of 10,000 social housing units over the next 10 years and said that was a long way away.

He said when it comes to developing sites for housing and social housing it was a “shared responsibility between central government and local government”.

He told RTÉ’s Today with Sean O’Rourke show it took three-and-a-half years to get a house “from field to door”.

On the same programme Solidarity People Before Profit councillor Matt Waine from Fingal Council said the Minister was“feeling the heat” and was seeking to blame councillors.

The real issue “is the elephant in the room”, he said, which is the absence of a properly funded public programme of building. “The Minister is kicking the can down the road.”

Cllr Waine pointed out a report from Fingal Council proposing the building of 1,200 affordable houses was “still sitting on the Minister’s desk”.

“He should have been on the phone immediately asking who do I make the cheque out to?”

Councils have to cut their cloth to suit their measure because of uncertainty with central government funding, Cllr Waine said, adding local authorities should be in a position to set up construction departments so there could be more direct building.