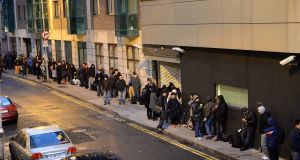 Immigrants in Ireland who apply for re-entry and renewal visas are being blocked from making appointments with the Irish Naturalisation and Immigration Service (INIS) by unscrupulous internet opportunists.

Internet ‘bot’ programmes are being used by the opportunists to block-book appointments with the INIS which are then sold through Facebook pages and phone apps to foreign nationals for up to €25.

The online visa renewal system was introduced in September 2016 to end the long overnight queues which had become a fixture outside the INIS office on Burgh Quay in Dublin. The online system allowed applicants to sign up, free of charge, six weeks in advance of the appointment.

However, in recent months it has become nearly impossible for foreign nationals to secure an appointment, with most people forced to spend weeks logging in each morning to secure the meeting.

Non-EU nationals who have permission to live in Ireland must apply for a re-entry visa if they wish to leave the country for a short period before returning here. They must also renew their permission to remain visa through the INIS system on a regular basis.

Luke* and his partner, who is from Latin America, started logging into the INIS system each morning last May in the hope of securing an appointment for visa renewal for June or July. Four months later they’re still filling out the form every day. “We have always had problems getting an appointment and I have had to keep the page open at work for days on end looking for an appointment to show up. Since last May I have never seen a single appointment slot appear on the website, yet the office is always full when I walk by, how could this be?”

Luke* has discovered websites offering appointments at a cost of €10-€25.

“It seems that entrepreneurial people have taken advantage of the way the booking system was designed and created bots that automatically fill the slots as they appear. It’s the same programmes they’re using with Ticketmaster to auto-populate the form straight away.”

Vikram Jain said many of his Indian colleagues have been unable to visit family or take holidays because of the backlog.

“The system is a failure. At least when we had to queue up overnight we didn’t have to wait two to three months for an appointment. For some people if they can’t sort out the visa in time they have to go on unpaid leave while waiting and lose a lot of money. People’s lives are being put on hold.”

Last month, the Department of Justice announced the online appointment service for re-entry visas would end from last Monday, September 3rd with the exception of emergency re-entry visas which are available if a person needs to travel abroad at very short notice due to a critical or unforeseen event.

People seeking re-entry visas must now send their applications with their passport by post to the INIS office with a processing time of five to six weeks. However, it is understood the online system will remain in place for people renewing their permission to stay in Ireland.

Elif Dibek, who has spent more than a decade renewing her residence permit, ran a campaign in 2014 calling for the government to create a more “dignified” application system rather than queuing through the night. Four years later, she is faced with the new barrier of having to send her passport away every year.

“I don’t understand how the Government can take tax-paying residents’ passports for five weeks and infringe on their right to freedom of movement without a good justification,” Ms Dibek told The Irish Times.

“I’ve been in this country since my Junior Cert years and feel very much at home in Dublin. However each year, when the time to renew my visa/residence or work permit comes around, suddenly I feel incredibly unwelcome.”

A statement from the INIS said it was aware some customers were experiencing difficulties in making an appointment.

Asked to comment on independent sites block-booking appointments, it said: “We are examining with our technical resources why this is the case and if multiple bookings are being made by individuals. We would regard this as a breach of trust in the system which impacts on others seeking appointments and steps are being taken to address this.”

It said the postal system for re-entry applications was “very secure” and that passports are tracked as they are processed. “In addition to the postal application system, INIS provides a limited number of emergency appointments daily for re-entry visa applicants who need to travel at short notice, for example in the case of a family emergency.”

The INIS has said its registration office on Burgh Quay will open on a number of Saturdays between September and November to meet the increase in demand for appointments.