Cost of the lowered rate since its introduction in 2011 has been €2.7bn 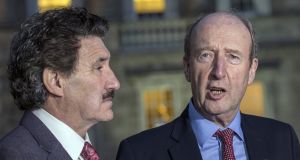 The Independent Alliance has called for the special VAT rate for hotels to be increased from 9 per cent to 13.5 per cent.

Minister for Tourism Shane Ross and Minister of State at the Department of Jobs John Halligan singled out the hotel sector for an increase, but the two differ on the application of the increased tax.

While Mr Ross believes large hotels in Dublin should be subject to the increased rate, he argued smaller facilities across the country should not.

Meanwhile, Mr Halligan told The Irish Times it should be enforced on every hotel in the country.

“I believe the industry is ripping off people across the country, particularly in Dublin. Many of the people who use hotel rooms in Dublin are from around the country and are being completely ripped off.

“I don’t think there can be any exemptions. It should be as across-the-board increase,” the Minister of State added.

It is likely that the hotel sector will face an increase in tax as Ministers seek to raise revenue in the budget.

Under proposals being strongly considered by the Government, the full 13.5 per cent rate will only be restored for businesses that sell “accommodation”, such as hotels, guesthouses and B&Bs.

The lower rate was introduced during the economic crisis to encourage tourism and to boost the hospitality sector. The cost of the rate since its introduction in 2011 has been €2.7 billion.