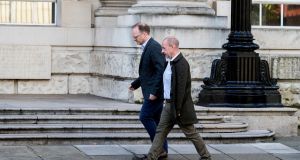 A search and arrest operation during an investigation into the suspected theft of confidential documents from the North’s Police Ombudsman’s Office was an attempt to intimidate journalists and whistleblowers, the high court in Belfast heard on Friday.

Counsel for the company behind a documentary into the loyalist murders of six men in the 1994 Loughinisland massacre, claimed police had abused their powers.

Two award-winning journalists involved in the film ‘No Stone Unturned’, Trevor Birney and Barry McCaffrey, were arrested, questioned and released last week as part of the inquiry.

Detectives from Durham Constabulary, supported by officers from the PSNI, also searched three properties in Belfast - two residential and one business premises.

Lawyers representing the documentary maker Fine Point Films are now challenging the legality of the search warrant. They claim it did not cover all of the material seized.

Police have given an undertaking not to examine any of the documents and computer equipment pending the outcome of the legal action.

Mr Birney (51) and Mr McCaffrey (48) were both present in court om Friday as their barrister contended a “vast quantity of journalistic material that has absolutely nothing to do with the investigation” was taken.

Barry Macdonald QC suggested an independent lawyer or a retired judge should be appointed to examine everything seized by police, filter out anything not covered by the warrant and return it as a matter of urgency.

“We are conscious that this application gives rise to serious issues concerning freedom of the press and abuse of police powers which, in our submission, have been used to intimidate journalists and prohibit not only journalists but whistleblowers,” he said.

Counsel for the police, Peter Coll QC, confirmed none of the documents or computer files have been accessed. He added that material may already have been returned to Fine Point Films if the undertaking had not been put in place.

Proceedings were then adjourned to take further instructions on the proposal for an independent assessment of everything seized by police.