President praises those providing essential services and utilities during pandemic 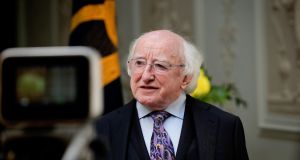 The best memorial to honour the efforts and sacrifice of front line workers, who have led the fight against the Covid 19 pandemic, would be to ensure that all such workers enjoy job security and decent working conditions, President Michael D Higgins has said.

President Higgins paid tribute to all involved in the fight against Covid-19 when he sent a message of support to the organisers of the Spirit of Mother Jones Festival in Cork. He said front line workers showed the same solidarity that Mother Jones exhibited in her fight for justice for workers in the US.

He recalled that Mother Jones, who was born Mary Harris near Shandon on Cork’s northside in 1837 and died in Maryland in the United States 90 years ago on November 30th, had galvanised American workers with her battle cry, “Remember the dead and fight like hell for the living.”

“A survivor of the Great Famine, the Yellow Fever Epidemic of Memphis and the Great Chicago Fire of 1871 which robbed her of her home, family and livelihood as well as the so called ‘Spanish Flu’ pandemic of 1918/1919, Mother Jones was a woman of enormous grit and vigour.

“Yet, despite the toll of such personal struggle and tragedy, she found and mustered the resolve that enabled her to contribute so much to the labour movement in the United States over a period of several decades,” he recalled.

President Higgins said that the current Covid-19 pandemic poses an unprecedented risk for those who work tirelessly and selfless in the Irish health system as well as those who ensure the continued delivery of essential services and utilities upon which Irish citizens depend.

“However out of such a crisis, we are presented with perhaps a once-in-a-generation opportunity to do things better, to embrace and bring to fruition a new paradigm of existence with each other, in relation to work and living and, with the world itself.

“Today, let us commemorate the many thousands around the world who have, through their generous and willing efforts in the service of others, lost their own lives to Covid-19, giving their lives for others with whom they shared the public world.

“Let us remember and celebrate also the many thousands more who continue to put their lives at risk in order to continue their important work ... to all those workers who have responded to the Coronavirus crisis with such a generous spirit of solidarity, we owe an enormous debt of gratitude.

“However gratitude, whose expression is so important, cannot be and must never be, perceived as any adequate substitute for the dignity, well being and security of employment which is the right of all workers in any far and inclusive society for which Mother Jones fought tirelessly.”

He said that as Ireland and the world navigates its way towards a shared and better future, people should resolve to build a lasting memorial to “those brave and selfless workers who have been too easily left out of the pages of history”.

“Today as we reflect on the dynamic role of trade unions in the wake of the pandemic and the safe-keeping of our front line workers, let us all commit to continuing our appreciation by standing in solidarity with all those whose contribution is so vital during this difficult time.

“Let us commit to recognising and enabling their right to protection, to be represented, to participate, to job security and decent working conditions now and into the future,” said President Higgins before wishing the Spirit of Mother Jones Festival well.

Spirit of Mother Jones Festival spokesman, Jim Nolan thanked President Higgins for his support and said given Mother Jones had survived at least three pandemics, the organisers felt they should make every effort to have a festival in spite of Covid 19 to remember the 90th anniversary of her death.

Mr Nolan said the Spirit of Mother Jones Festival, which will be available on line, will begin on Friday afternoon with a discussion on the role of front line workers and trade unions during the pandemic with contributions from Phil Ni Sheaghdha of the INMO and Anne Piggott of ASTI.

The festival will streamed throughout the weekend on www.corkcommunitytv.ie and Virgin Media 803 and the full festival programme with dates of various talks and lectures, many of a historical and commemorative nature, can be accessed at www.motherjonescork.com, said Mr Nolan.